EDITORIAL: Japan must not rush to gut its purely defensive security policy 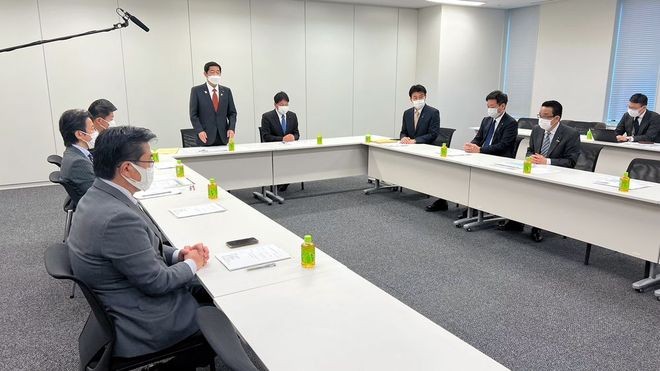 The Liberal Democratic Party and its junior ruling coalition partner, Komeito, reach an effective agreement on having the capabilities to strike enemy bases during a working-level meeting in the Diet on Nov. 30. (The Asahi Shimbun)

If Japan decides to acquire the military capability to strike bases and other targets within enemy territory, it will effectively make a radical departure from its strictly defensive security policy principle for the postwar period.

There is no guarantee that such capabilities will work as effective deterrence to discourage an enemy from attacking Japan. The move would instead risk provoking military countermeasures from potential enemies and heighten tensions in the region.

Eviscerating the principle of never posing a security threat to any other country, which Japan has firmly upheld as the core of the bitter lessons it learned from World War II, would not be a wise course of action.

Prime Minister Fumio Kishida has not offered any sufficient and convincing explanation about the policy shift the government is planning to make. The administration must not be allowed to make a headlong rush into the decision.

NO MEASURE TO PREVENT ESCALATION PROPOSED

The ruling Liberal Democratic Party and its junior coalition partner, Komeito, are set to reach a formal agreement on Dec. 2 to give the nation the ability to strike enemy bases.

The policy change will be spelled out in three key security policy documents the government is working to revise. The updated versions will be published by the end of the year.

The envisioned capability to strike enemy targets is described by the government as “counterattack capabilities.” But the capability can be used not just to stage a reprisal attack against an enemy but also in response to an enemy’s move to “embark on” an attack on Japan, according to the government.

But it would be very difficult to ascertain that an enemy is in the process of attacking Japan. Such a situation could prompt Japan to take an action that is seen as a pre-emptive strike in violation of international law.

The agreement between the LDP and Komeito does not give any criteria for determining that an enemy has set out to launch an attack against Japan. Policymakers say decisions will be made on a case-by-case basis in specific situations. This approach will also be applied to choosing enemy targets to strike.

While the agreement does not cite an enemy’s “command and control functions” as potential targets, unlike the LDP’s proposal to the government, no mention is made about limiting Japan’s possible counterattacks to military targets. This is no way to impose effective restrictions on Japan’s use of the ability to strike enemy bases.

Under the agreement, Japan will also be allowed to strike enemy targets when a nation that has close relations with Japan comes under attack. That could occur when a so-called “survival crisis situation,” or a security crisis that directly threatens Japan’s very survival as a nation, breaks out.

This provision is in line with the new national security legislation enacted during the administration of former Prime Minister Shinzo Abe. This provision is apparently designed to allow Japan to launch a counterattack when the United States, Japan’s security ally, comes under attack.

The Japan-U.S. security alliance was built on the division of roles under which the Self-Defense Forces (SDF) act as the “shield” to defend the nation while the U.S. military is supposed to serve as the “spear” by using its military capabilities to strike enemy targets.

If the SDF performs part of the “spear” functions, the arrangement between the two sides could change significantly. If Japan expands its offensive role, it will move further from the defense-only principle.

NO MORE REASSURANCE TO NEIGHBORS

After the war, Japan made a fresh start as a peace-loving nation under its pacifist Constitution, which set the nation’s most basic security policy principle.

Since 1956, the government has maintained that Japan can strike missile bases in enemy territory in self-defense only when there is no other means. But Japan has not made a move to acquire such capabilities partly because of practical difficulties.

This approach is tantamount to declaring that Japan will not attack the territory of other nations and does not give other countries any pretext for attacking Japan. It has the effect of providing “reassurance” to neighboring countries.

The proposed policy shift will cost Japan this strategic advantage. The government and the ruling coalition have repeated that the defense-only principle will be upheld despite this policy change. It is, however, doubtful whether Japan’s neighbors will believe this pledge when Tokyo is setting out to deploy a large number of long-range missiles.

These include launching missiles that travel on an irregular trajectory, hypersonic missiles and saturation attacks involving simultaneous use of huge numbers of missiles to overwhelm the target nation’s defense system.

The question, however, is what levels of military capabilities are needed to deter an enemy armed with enormous missile arsenals. Another big question is whether Japan can accurately identify enemy targets to strike.

It is also unclear what Japan should do when deterrence fails to work and Japan comes under attack. All these practical and tactical questions cast doubt on the viability of the strategy.

We cannot help but feel worried about how national security debate has been focused only on military capabilities to counter enemy attacks.

Tokyo has just begun direct security dialogue with Beijing. There has been no progress toward establishing an international framework to prevent North Korea from developing nuclear weapons and missiles.

It cannot be claimed that the Japanese government has made sufficient diplomatic efforts focused on preventing war from breaking out.

NO CONVINCING EXPLANATION TO THE PEOPLE

There have also been serious problems with the process leading to the LDP-Komeito agreement on the issue.

After taking office, Kishida decided to revise the three key security policy documents. But he said almost nothing about the idea of possessing capabilities to strike enemy bases, only saying repeatedly that the government would consider all options without ruling out any.

Behind the scenes, however, the Kishida administration has been steadily taking steps toward the policy shift, including negotiations with the United States to purchase 500 Tomahawk cruise missiles.

An expert panel set up by the administration to discuss revisions to the documents did not engage in any in-depth debate on the issue and produced a report saying it is “indispensable” to possess such capabilities after only four meetings.

The administration appears to have made the decision before debate began as also indicated by its decision to increase Japan’s defense spending to an amount equivalent to 2 percent of the nation’s gross domestic product in fiscal 2027.

Under the LDP-Komeito agreement, to use capabilities to strike enemy bases the government needs to have the Cabinet endorse a basic plan for the operation and win Diet approval for it.

There is every reason for requiring Diet approval for such a military action. But the government’s proposal to acquire such capabilities and the envisioned legal framework for taking the step should first be subjected to Diet debate involving both ruling and opposition parties.

The Kishida administration should not rush to make the weighty policy decision with huge implications for the nation’s most basic security policy creed without first winning understanding and consent from a broad spectrum of the Japanese public.