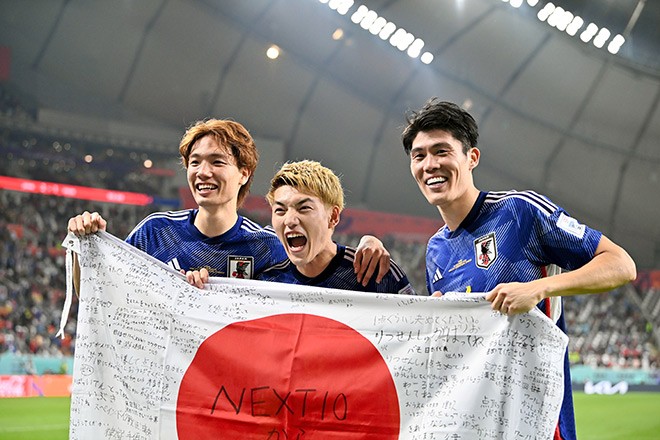 Japan’s particular run through Group E to advance to the knockout stage of the World Cup seems to have surprised everyone—but not super-sub Ritsu Doan.

The midfielder added another goal in the tournament to help Japan rally past Spain 2-1 in their final match of group play and send Samurai Blue to the final 16 for the second straight time.

Doan, who plays for SC Freiburg in Germany, was instrumental in both victories.

With Japan trailing Spain 0-1, Doan was sent in at the start of the second half, replacing Takefusa Kubo, who plays for Real Sociedad.

“I was told to be aggressive because we had no choice but to go on the offensive,” Doan said after the game.

His chance came after just three minutes on the pitch.

He received the ball from a header by winger Junya Ito, of France’s Stade Reims, and took a powerful shot with his left foot. The ball found the back of the net.

“I was determined to shoot myself because it was my favorite route,” Doan said.

Three minutes later, Doan kicked the ball past the front of the Spanish goal and it appeared to have crossed the byline. Another substitute, Kaoru Mitoma, who plays for Brighton, knocked the ball back to the penalty area, and Fortuna Dusseldorf’s Ao Tanaka kneed the ball into the netting.

A Video Assistant Referee ruled the ball had stayed in bounds. And Japan hung on to win the match.

Before the game on Dec. 1, Japan’s chances appeared in doubt not only because of Spain’s strength but also because of Samurai Blue’s loss to Costa Rica.

However, Doan, 24, has repeatedly said, “I love bouncing back from adversity.”

He had also entered the match against Germany as a substitute and scored the equalizer. Japan won that game 2-1, sending shockwaves around the soccer world.

After the victory over Spain, Doan said, “I think people in Japan are now convinced that the opening game victory (against Germany) was inevitable, not a miracle.”

Samurai Blue will next face Croatia, the runner-up in the 2018 World Cup, on Dec. 5. Japan is aiming to advance to the quarter-finals for the first time.

Spain also advanced from Group E, while Germany and Costa Rica were both ousted.

“We haven’t yet changed history but overcame a big hurdle,” Doan said. “We fought together to bring this result.”