‘Banzai’ cheers unite Samurai Blue fans half a world away

Fans across Japan celebrate their team's World Cup victory against Spain early on Dec. 2. (Footage by The Asahi Shimbun) 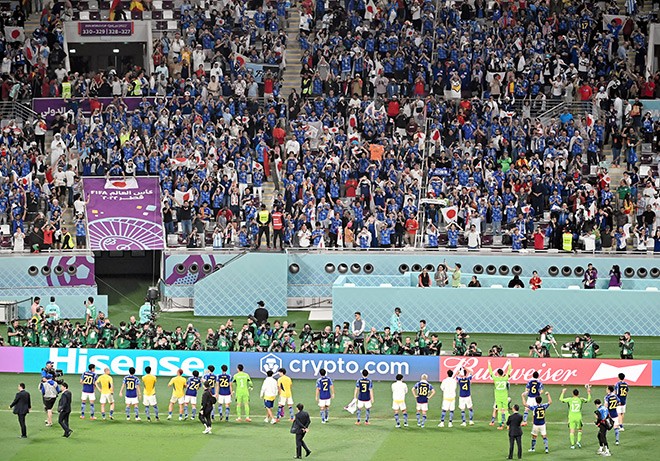 Japanese supporters at Khalifa International Stadium in Doha, Qatar, were relatively subdued in the first half of the match against Spain. The Spaniards had taken a 1-0 lead and appeared in complete control of the game.

But things changed drastically on and off the pitch early in the second half.

After Samurai Blue took a 2-1 lead, the cheers of the Japanese fans drowned out those of the Spanish supporters, who accounted for roughly half of the 44,000 people in the stands.

Chants of “Nippon” reverberated loudly throughout the stadium after the final whistle.

Some Japanese supporters cried after the upset win while others shouted “banzai.” And others remained silent, stunned by the outcome that ensures Japan will play at least one more game at the World Cup.

Risa Inoue, a supporter of Kawasaki Frontale in the J.League who was at the stadium in Doha, said Japan’s advance to the knockout stage was all the more remarkable given the strength of its group opponents.

“People said Group E was the ‘group of death,’ but a miracle occurred,” she said.

“(The two) had vowed to do well in the World Cup. I’m happy with how they lived up to their words,” Inoue said. “I had planned to go back to Japan tomorrow but I’ve decided to stay here longer.”

Shintaro Mitsushiro, 43, another Japanese fan, traveled with his wife and two small children from their home in Singapore to watch the game in Qatar.

“The match was just dramatic. Japanese people can do many things. We could stun the world. I’m so proud,” he said.

Public viewing sites, sports bars and other venues operated at special hours to allow fans to take in the action.

As many as 420 fans had gathered at a public viewing event in Tokyo’s Minato Ward when the match began at 4 a.m. Japan time.

They jumped for joy when Japan scored the two goals.

Despite the early starting time of the game, all tickets for the public viewing event were sold out, according to organizers.

At a sports bar called Stadium Cafe in Osaka, Japanese supporters expressed their happiness when the game ended by jumping, high-fiving and shouting, “Oh, Nippon.”

Yuji Fujisaki, the 52-year-old head of the bar, said he had predicted that Japan would defeat Spain 2-1.

“I just made that prediction hoping it would come true. I’m so overwhelmed. Thank you!” he said.

Kento Shogaki, a 30-year-old company employee watched the game in the sports bar, as he had done for the Japan-Germany game.

After the victory over Spain, Shogaki said, smiling: “This is like a dream. I can’t comprehend what happened. I have to work today, but Japan’s win will motivate me.”