Volunteer workers for the World Cup thanked Japanese supporters for picking up rubbish at the stadium. (Provided by Hirokazu Tsunoda) 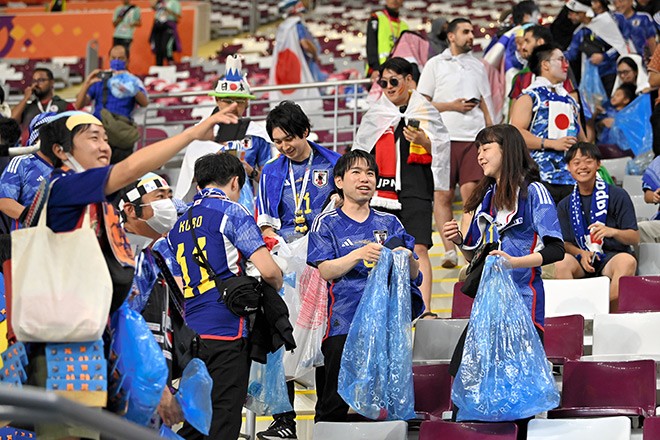 Japanese soccer fan Hirokazu Tsunoda admitted he was nervous when he was asked by volunteer workers to not leave the stands following a World Cup victory by the Samurai Blue over Germany on Nov. 23.

Tsunoda, 60, is highly visible as he is sporting a Japanese traditional topknot hairstyle called "chonmage" at the competition in Qatar. The man, nicknamed "Chonmage Captain," was told by the workers "Don't leave now," and "stay seated."

Tsunoda said he feared that, “I might have stood out too much,” or “they might tell me off or something,” as more volunteers continued crowding around him before their number eventually reached about 500.

Then a male volunteer with a megaphone told him and his fellow Japanese supporters in English, “I would like to thank the Japanese fans here.”

The man continued by saying in Japanese, “Arigato gozaimashita" (Thank you).

After the World Cup’s opening match between Qatar and Ecuador on Nov. 20, around 30 Japanese supporters including Tsunoda picked up plastic bottles and other rubbish strewn about in the stands.

These Japanese supporters include members of a group called “Tomo ni Qatar e" (Together to Qatar) headed by Tsunoda.

A well-known Middle Eastern YouTuber posted a video on the internet of them cleaning up after the match, which garnered attention from around the world.

The volunteers stopped Tsunoda from leaving the stadium to thank him and his fellow supporters for their cleanup efforts.

Tsunoda and other Japanese supporters posed for a photo together with the huge contingent of volunteer workers.

Since the 2008 Beijing Olympics, Tsunoda has cheered on the Japanese team at the Olympics and the World Cups, being highly visible with his chonmage hairstyle.

However, Tsunoda says that being thanked by volunteers and taking photos with them “will never happen again in my life," adding that this is like “a miracle.”

In addition, the organizing committee of the Qatar World Cup publicly thanked the approximately 30 Japanese supporters including members of Tomo ni Qatar e for cleaning up the stadium.

Tsunoda resides in Kashiwa, Chiba Prefecture, and runs a shoe shop in Matsudo in the same prefecture.

The Asahi Shimbun interviewed him online.

Tomo ni Qatar e is a group that Tsunoda heads as part of his volunteer activities that he began after the 2011 Great East Japan Earthquake and tsunami.

He has undertaken activities such as taking children of areas affected by natural disasters to the J.League and World Cup games.

He brought eight high school and university students to the Qatar World Cup through the approximately 4 million yen ($29,600) donated to the group.

The students are from five areas hit hard by natural disasters including Onagawa in Miyagi Prefecture, Uwajima in Ehime Prefecture and Kuma in Kumamoto Prefecture.

The students have already returned to Japan after watching Japan’s World Cup matches against Germany and Costa Rica as well as meeting with students in Qatar.