LDP’s Sugita retracts some, but not all, of her offensive words 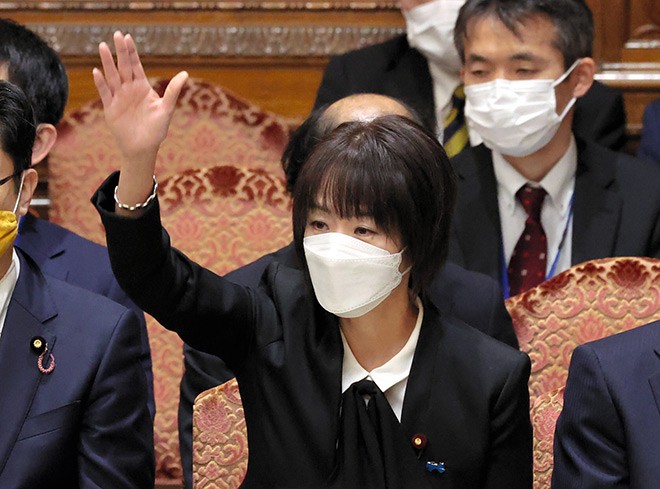 Mio Sugita at a session of the Upper House Budget Committee on Dec. 2 (Koichi Ueda)

Mio Sugita, parliamentary vice minister for internal affairs and communications who has a history of uttering derogatory comments, said she will apologize to sexual and other minorities she may have offended.

She also told a Dec. 2 session of the Upper House Budget Committee that she retracts some, but not all, of the remarks in question that she made before she assumed her current post.

Sugita said she was not certain if her words were actually discriminatory when she was asked.

“I will carefully examine my past remarks, including whether they amounted to discrimination,” she said.

Sugita, 55, said her boss, internal affairs minister Takeaki Matsumoto, told her to withdraw some of the past comments and offer an apology to those offended.

Opposition parties have attacked Sugita, a Lower House member of the ruling Liberal Democratic Party, over whether she is fit for the post.

Her retracted comments included a passage in a magazine article in 2018 that said same-sex couples are “unproductive.”

She also retracted her description of ethnic Korean residents and Ainu aboriginal people from Japan who wore traditional costumes at a session of the U.N. Committee on the Elimination of Discrimination Against Women in February 2016. Sugita, who was also present at the session in Switzerland, called them “middle-aged women in cosplay” in her blog.

However, Sugita said she would not take back other remarks, including those that infuriated victims of sex crimes.

Journalist Shiori Ito became a symbol of the #MeToo movement in Japan by speaking publicly about being raped in a hotel in Tokyo in 2015.

Sugita said Ito was also “at fault” for the incident.

In addition, the lawmaker said at a party meeting on relief programs for victims of sex crimes in 2020 that “women can lie as many times as they like.”

At the Budget Committee meeting, Daisuke Tenbata, an Upper House member of the opposition party Reiwa Shinsengumi, said Sugita’s comments reflect a bygone era of a totalitarian government that sought to ostracize people with disabilities and homosexuals as a worthless existence in society.

Tenbata is disabled and uses a wheelchair.

Sugita was given her current post at the Ministry of Internal Affairs and Communications when the Cabinet was reshuffled in August.

The ministry has oversight on measures to prevent defamation and libel on the internet.

Opposition parties, as well as many people in the public, are simply aghast that someone with Sugita’s history could be appointed to such a position.

Prime Minister Fumio Kishida said Sugita is accountable for anything she has said previously.

But he reiterated that he will retain her at the post, saying he has placed the right people in the right jobs.