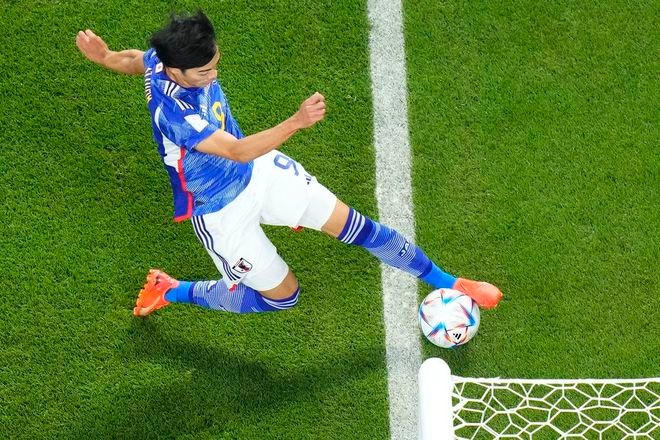 Japan’s Kaoru Mitoma appears to have the ball over the line before crossing it for a goal during the World Cup group E soccer match between Japan and Spain, at the Khalifa International Stadium in Doha, Qatar, on Dec. 1. (AP Photo)

“A little with the head of Maradona and a little with the hand of God,” so goes a much bandied around quote by Argentine soccer superstar Diego Maradona (1960-2020) following a still controversial World Cup match.

The first of the two goals he scored during a quarterfinal game against England at the 1986 event in Mexico had in fact been hit not with his head, as it was assumed, but with his left hand during a tussle in front of the goal.

Despite furious protests by the opponent team, the referees did not back down on their decision. Maradona later said in his autobiography, “It is very difficult not for it to be seen by two people, the referee and the linesman, so that’s why I said it was the ‘hand of God.’”

Maradona, true to form, did not sound the least bit apologetic.

I watched a relay broadcast, in the early hours of Dec. 2, of a World Cup match in Qatar that pitted Japan against Spain. My breath was taken away by Kaoru Mitoma’s stunt that helped Japan clinch the winning goal.

Mitoma slid daringly into the side of the Spanish goal to kick back the ball that had gone off course. It appeared to my sleepy eyes of an amateur that the ball had crossed out of bounds.

But the side of the ball was barely above the endline beneath Mitoma’s extended left leg, perhaps by a matter of millimeters. And those millimeters mattered so much as to divide heaven and hell.

Conclusive evidence for a decision came from a Video Assistant Referee system, which was first introduced for the 2018 Games. A team of judges who were apart from the referees on the field replayed videos and checked up other information to confirm the facts.

It may surprise people to know that a sensor is embedded in the official ball of the current games, according to officials.

That allows ball locations to be determined accurately. An artificial intelligence system is also in place to help make offside decisions. The brilliance of such cutting-edge technology is amazing.

Special tricks like the “hand of God” are perhaps, for better or for worse, things of the distant past.

No state-of-the-art technology, however, could have predicted the tour de force of Japan, which has defeated the former champions of Germany and Spain to clinch a slot in round of 16 of the World Cup.

And that is where the real thrill of sports resides.