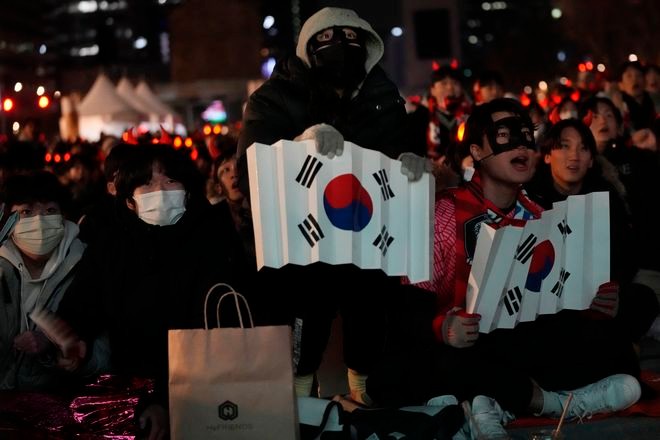 South Korean soccer fans react as they watch a live broadcasting of the Group H World Cup soccer match between South Korea and Portugal in Qatar, at a public viewing venue in Seoul on Dec. 3. (AP Photo)

SEOUL--South Koreans thronged the streets early on Saturday, shedding tears of joy in sub-freezing temperatures after their national team's last-gasp, comeback win over Portugal to advance to the final 16 at the soccer World Cup.

They celebrated striker Son Heung-min's tearful post-match interview and munched Ghana-branded chocolates to honour the plucky performance by the African nation whose match result ensured South Korea's berth in the knockout round.

Some 8,000 supporters gathered in Gwanghwamun Square in downtown Seoul despite the winter chill and midnight start.

Korea began the match third of the four teams in Group H and were at risk of returning from Qatar as they were deadlocked 1-1 with already-qualified powerhouse Portugal, until Wolverhampton Wanderers' Hwang Hee-chan scored in added time to clinch the win.

The team, and the fans back home, then had to wait an agonising 10 minutes to learn they would progress, when Uruguay beat Ghana but crashed out of the tournament on goal difference with Korea. Cheers erupted from apartment complexes and the streets across South Korea.

"I felt absolutely thrilled - we were cornered going into injury time, and Sonny was running like crazy," said Lee Tae-woo, referring to Tottenham Hotspur striker Son, after watching the game with friends. "I was so nervous but I'm so glad that they made it."

Many on social media circulated Son's interview, in which he said through tears he had not performed well, thanking his team mates for pulling off the dramatic win.

"It was heartbreaking to see him cry and say sorry for his performance, though he did great even with injuries," said Kim Hyun-joo, a Seoul resident who said she was not familiar with football but enjoyed the match.

President Yoon Suk-yeol congratulated the team on Facebook, saying he hoped the players would demonstrate their potential and enjoy the tournament.

They play five-times champions Brazil on Monday, seeking another upset to get to the quarter-finals for their second time.

The term "Ghana chocolate" was trending on South Korean Twitter, referring to a brand by Seoul-based Lotte Confectionery Co Ltd using cacao beans from Ghana. Some Korean fans touted the African side for doing their best until the last minute.

"I'm going to eat no chocolates other than Ghana until I die," one person tweeted. Another said: "What am I doing? On my way to a CVS to get a Ghana, of course."