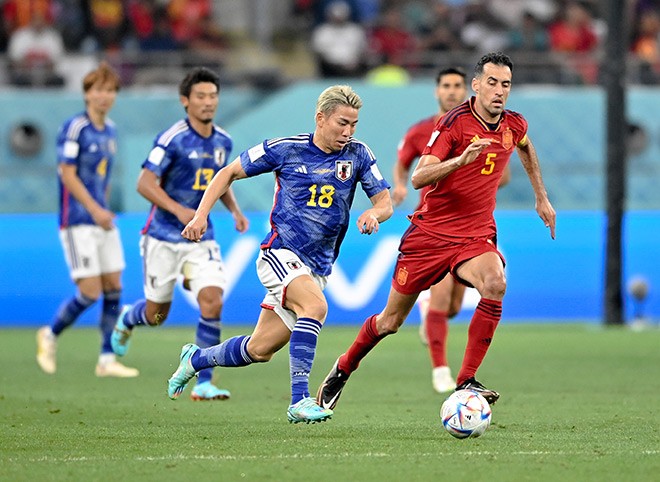 DOHA--Japan has already scripted one of the best stories of the World Cup with comeback victories over former champions Germany and Spain but Takuma Asano says the national squad has not achieved anything yet.

Winger Asano scored a brilliant winner in the Germany win that kickstarted Japan’s campaign but that was followed by a shock reverse at the hands of Costa Rica in the second group game.

Another upset against Spain, however, sent Japan into the last 16 as group winners and set up a date with 2018 losing finalists Croatia at Al Janoub Stadium on Monday.

“Even though we didn’t win them all, I think the most important thing is that we made it through the group stage,” Asano told reporters at the team training camp on Saturday.

“Now I started feeling it’s becoming a great World Cup. But we haven’t achieved anything yet, so honestly speaking, I think everything starts from now."

Attacking midfielder Daichi Kamada started all three group games and believes progressing despite having been drawn in a so-called “Group of Death” had given the players confidence they can take on and beat Europe’s best.

“We managed to win the games in a very difficult group and came this far,” he said. “We advanced to the next round as the group top and Croatia advanced as the second. Of course, they have many good players, and they are a good team.

“But our team is also great, so I think we have a big chance to win. I hope we can fight as one and achieve a good result.”

Monday will be Japan’s fourth last 16 clash at the World Cup finals but it has never yet been past the opening round of the knockout stage.

Asano said improving that record was not the full extent of the team’s ambitions.

“I think it would be great if we could make a breakthrough to the last eight which we have never achieved before,” he added.

“But it’s just simply one of our goals. We will put on our best performance to win the next game.”