City calls for charges against nursery school head for cover-up 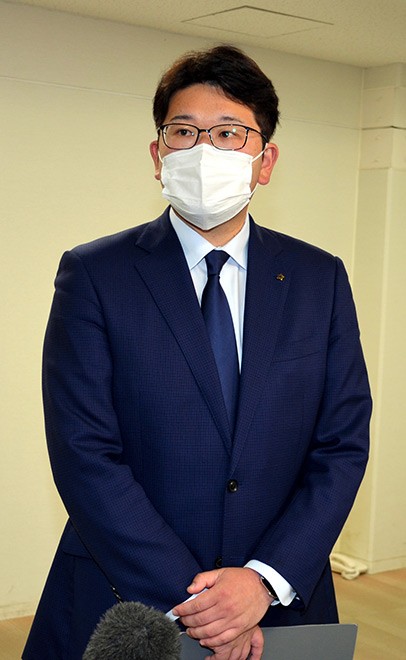 Susono Mayor Harukaze Murata speaks at a news conference on Dec. 4 after three former nursery teachers were arrested on suspicion of abusing children at a preschool in the city in Shizuoka Prefecture. (Tamotsu Sugao)

SUSONO, Shizuoka Prefecture--The Susono city government filed a criminal complaint with police on Dec. 5 against the head of a nursery school here, alleging he helped cover up shocking acts of child abuse by his staff.

The complaint comes a day after police arrested three women on suspicion they verbally and physically abused 1-year-olds at the Sakura Nursery School between June and August. Instances of the abuse included one child being dangled by the feet and another being beaten until they cried.

Susono Mayor Harukaze Murata said that the head of the school, Toshihiko Sakurai, is liable because he knew about the abuse yet still tried to cover it up by pressuring staff to keep quiet.

“It took such a long time for the abuse to go public after it surfaced in August because of his problematic response,” Murata said.

But the mayor also apologized for failing to act sooner and said he and the deputy mayor will face disciplinary measures for the delay.

An inside source had tipped off city officials about the mistreatment on Aug. 17, but it took several months before it became public.

School officials reported 15 kinds of abuse to city authorities on Aug. 25, but the city only publicly revealed what occurred on Nov. 30, after it investigated and shared its findings with police.

In late October, Sakurai tried to prevent the scandal from becoming public by having staff sign a written oath barring them from sharing any personal information about the children or other staff members with third parties. It also forbid them from leaking documents, digital files and confidential matters about the school.

Sakurai even admitted to parents and school officials at a Dec. 1 meeting that he got down on his hands and knees apparently to beg one of the teachers to remain silent when he learned the teacher had tried to blow the whistle.

The suspects are Sachi Miura, 30, of Numazu in the prefecture; Kaori Komatsu, 38, of Susono; and Rie Hattori, 39, of Nagaizumi in the prefecture. The nursery teachers had already quit their jobs from the licensed private school prior to their arrests.

(This article was written by Tamotsu Sugao and Akari Uozumi.)