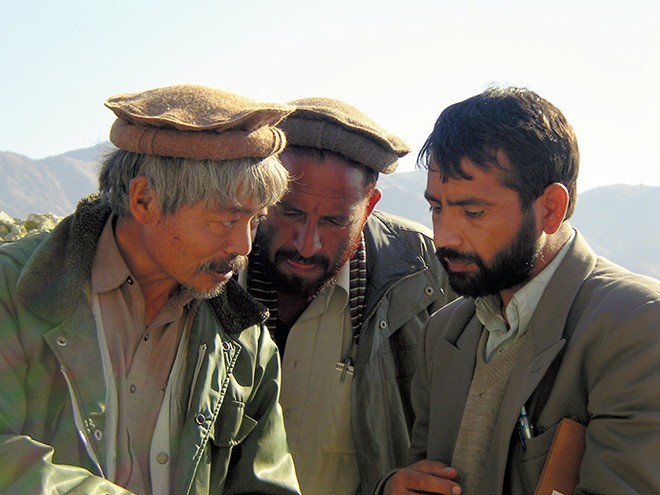 Three years after renowned doctor and humanitarian worker Tetsu Nakamura was gunned down in Afghanistan, his decades of work in the country is being carried on by others to help future generations of Afghans.

Nakamura was killed in an ambush in Jalalabad city in the eastern province of Nangarhar on Dec. 4, 2019. He was 73.

“Dr. Nakamura jumped into the unknown and took on tough challenges,” said Sara Henmi, 18, a student at Fukuoka High School, who was among participants at a recent memorial service in Fukuoka city to honor Nakamura.

BUILDING TO SAVE LIVES

Sora Akazawa, 35, started working at the office of Peshawar-kai one year ago. The nongovernmental organization was established to support Nakamura’s activities.

Peshawar-kai currently has 26,000 members and supporters--a 10,000 increase over the past three years.

After graduating from university in Tokyo, Akazawa worked mainly as a house designer and then moved to an architectural office in Tokyo that builds large, public facilities.

He said he felt deep stress because he was expected to always produce results.

Akazawa said he learned of Nakamura’s death on the radio while at work.

Although Nakamura was a doctor, he engaged in physical work such as building irrigation channels for Afghans who were suffering from drought. All these to save lives.

Akazawa didn’t know anything about Nakamura. He said he watched video-sharing sites about him and read books.

He also learned how water channels were made, how wasteland could be turned into fields, how villages were then revitalized and how people’s lives were revived. As a person involved in building, Akazawa was deeply moved by Nakamura’s deeds.

“I felt it was beautiful, putting people at the center, building things for the sake of their lives,” Akazawa said. “It was in contrast to making buildings that are fashionable only on the surface.”

Akazawa quit his company in Tokyo and sent his resume to Peshawar-kai in Fukuoka.

Over the past year, he has been involved in activities to support NGOs that are developing irrigation channels in Afghanistan. He also assists showing DVDs to others summarizing Nakamura’s activities and giving lectures about him.

Akazawa’s goal is to go to Afghanistan to help the locals there.

Peshawar-kai held a memorial service in Fukuoka city on Nov. 26, ahead of the third anniversary of Nakamura’s death, which 450 people attended.

“While we have been saddened by the loss of Dr. Nakamura over the past three years, we feel he is always with us,” said Masaru Murakami, Peshawar-kai’s chairman, after offering silent prayers. “This is because the many projects that Dr. Nakamura undertook are still alive.”

Murakami told how members of Peshawar-kai are following in Nakamura’s footsteps by offering medical assistance, helping with agriculture and constructing irrigation channels.

“I feel my father is there (when I look at trees my father planted),” said Nakamura’s daughter Akiko.

Video messages were sent from the staff of Peace Japan Medical Services (PMS), a nongovernmental organization that Nakamura led in Afghanistan.

They said many people had a great regard for Nakamura, and a road and a monument were named after him in his honor.

Nakamura is an alumnus of Henmi’s high school. She was surprised at the scale of his activities and felt a strong connection with him.

Henmi established a Peshawar group in her school to teach her peers about his aspiration. She created a quiz on Nakamura and made a presentation at the school festival.

She also organized online lectures and connected with young people outside the prefecture.

One was Yuko Takabayashi, 20, a student at the Kobe City University of Foreign Studies, who resides in Kyoto.

Takabayashi had been interested in refugee issues. After reading books about Nakamura, she sympathized with his beliefs and joined Peshawar-kai.

“People often talk about peace and international cooperation without knowing what actually happens on site,” she said. “Dr. Nakamura’s activities taught me that it is important to focus on the people and issues in front of you first.”

In March, Henmi and Takabayashi created a group with several people in their teens and twenties, including junior high school students, with whom they connected online.

They intend to share the humanitarian assistance activities of Peshawar-kai and Nakamura’s remarks.

The group formed a technical support team of civil engineering experts in Japan and completed a new small dam in February through online discussions with local NGOs.

The organization also began work on a small irrigation channel in October.