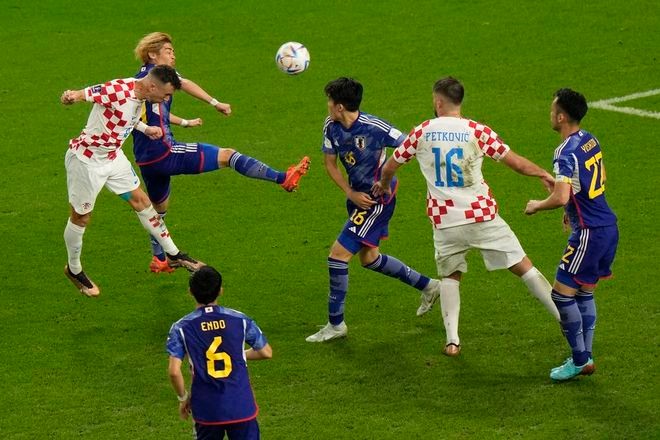 Croatia's Ivan Perisic, left, scores his side's opening goal during the World Cup round of 16 soccer match between Japan and Croatia at the Al Janoub Stadium in Al Wakrah, Qatar, on Dec. 5. (AP Photo)

AL WAKRAH, Qatar--Goalkeeper Dominik Livakovic saved three spot-kicks as Croatia beat Japan 3-1 in a penalty shootout to reach the World Cup quarter-finals for the third time after an enthralling 120-minute contest finished deadlocked at 1-1 on Monday.

Takumi Minamino, Kaoru Mitoma and Maya Yoshida were all denied by Livakovic before Mario Pasalic coolly sent Japan keeper Shuichi Gonda the wrong way to set up a last-eight date for the Croatians with Brazil or South Korea on Friday.

Three times in the knockout rounds in Russia four years ago Croatia came from behind to advance after extra time before losing to France in the final.

They once again showed their resilience and patience by coming from a goal down to tame a lively Japan team who had beaten Germany and Spain in the group stage.

Daizen Maeda opened the scoring for Japan in the 43rd minute and Ivan Perisic headed the equalizer 10 minutes after the break but the teams could not be separated over the remainder of the game.

"The Japanese might have underestimated us - never do that to the Croatians," Croatia coach Zlatko Dalic told reporters.

"We're a small nation, but we're diligent, we're hard-working and we fight for what we want. "When we started the penalty shootout today, I was very confident, and I trusted (Livakovic)."

For Japan, this was the fourth time they suffered heartache in the last-16 after losing to Turkey in 2002, exiting on penalties against Paraguay in 2010 and giving up a 2-0 lead to lose to a stoppage-time goal against Belgium four years ago.

"Every day, for four years, we worked hard to break this barrier (by reaching the final eight) but we couldn't get the result we wanted," captain Yoshida said.

"It's really hard to take."

After all their hard work in topping a difficult group and matching the Croatians for 120 minutes, Japan crumbled in the shootout with only Takuma Asano converting his penalty.

Nikola Vlasic and Marcelo Brozovic put Croatia 2-0 ahead and even though Marko Livaja hit the post with his spot-kick, Pasalic was able to seal the deal with the fourth penalty.

"The result of the penalties can't be blamed on anyone," said Japan's Ritsu Doan.

"The problem was that we couldn't get the job done in 120 minutes."

The game was more open than anyone had reason to expect, with Croatia ratcheting up the physicality to gradually take control of midfield and Japan trying to hit them on the break.

Perisic was put through on goal in the eighth minute but Gonda pushed away his shot and Bruno Petkovic also had a one-on-one, only to tap an attempted pass tamely through the Japanese goalkeeper's legs.

Japan showed far more adventure than they had in the first half of their group matches and Shogo Taniguchi, Daichi Kamada and Maeda all had chances to open the scoring before the latter broke the deadlock in the 43rd minute.

Doan took the ball from a short corner and curled it into the box where Bruno Petkovic deflected it back across the six-yard area under close attention from Yoshida and Maeda pounced to tuck it into the net.

The equalizer came 12 minutes later with a cross from the same flank, Dejan Lovren lofting a beauty into the box and Perisic getting in front of his marker to head the ball powerfully into the bottom right corner of Gonda's goal.

That brought Japan out of their shells and Wataru Endo was soon firing in a long-range effort which Livakovic tipped over the bar.

Luka Modric had a sweetly struck shot from range turned over by Gonda in the 63rd minute and substitute Ante Budimir steered header wide of the post.

Gonda again had to be at his best to keep out a rocket of a shot from Perisic in the 77th minute, while at the other end Japan continued their raids but without carving out any clear-cut chances.

Extra time was more ragged although a thrilling run and piledriver of a shot from Japan substitute Kaoru Mitoma brought a fine save out of Livakovic just before the break.