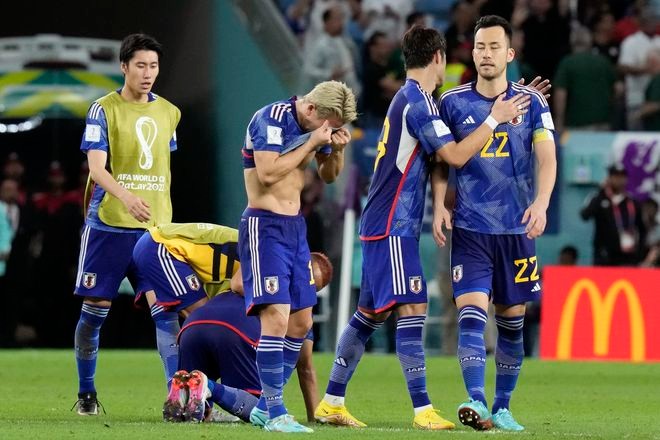 Japan players are dejected after Croatia's win in the World Cup round of 16 soccer match between Japan and Croatia at the Al Janoub Stadium in Al Wakrah, Qatar, on Dec. 5. (AP Photo)

AL WAKRAH, Qatar--After making it back to the round of 16, Japan is headed back to the drawing board.

“Penalties. Nothing you can do,” Japan midfielder Wataru Endo said. “You can’t blame anyone. That we let it get to a shootout was the reason for the defeat. The preparation for the next one (World Cup) starts today.”

Japan scored first on Monday at Al Janoub Stadium, but Croatia got one back in the second half and sent the match to extra time. Neither was able to score in the additional 30 minutes of play.

But this year was different. Drawn into a difficult group with two of the three most recent World Cup champions, Japan beat both Spain and Germany by identical 2-1 scores in Qatar to finish first in the opening round.

Japan coach Hajjme Moriyasu tried to soften the blow of another knockout loss, saying the team had entered a “new era.”

“We cannot be superheroes in one go,” Moriyasu said. “We have to improve step-by-step. But Japan is reaching a level where we can play on the world stage.

“These players can look eye-to-eye with anyone now and take confidence in who we beat.”

Moriyasu addressed his team at the center of the field after the loss. Many players slumped on the ground, others cried, and everyone consoled anyone within reach.

“Although the result was not what we expected, I told them (players) that it doesn’t negate everything they did,” Moriyasu said. “But we could not break through the round of 16 and see a new landscape.”

All credit to him, Moriyasu said.

“We have to accept this result,” the coach said. “But whether we succumbed to pressure, I don’t think so. I think the goalkeeper was great.”

Moriyasu preached for months that Japan’s goal was to reach the quarterfinals. Nothing less. Japan goalkeeper Shuichi Gonda addressed the failure directly.

“We came up short,” he said. “We did everything we could the last four years.”