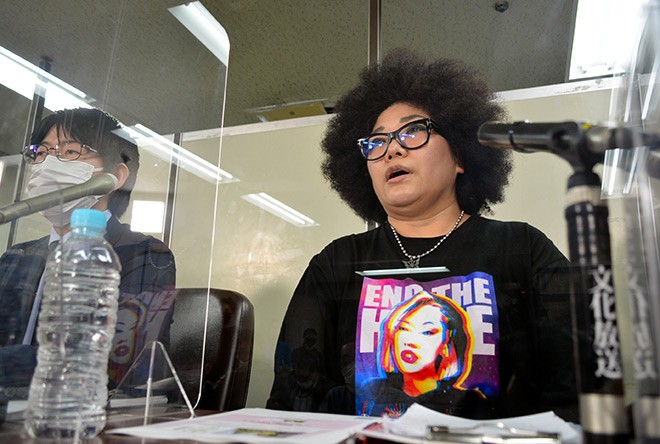 The mother of a reality TV star who killed herself after she was cyberbullied has filed a lawsuit against the companies behind the show for not fulfilling their responsibility to protect the cast.

Hana Kimura, 22, a professional wrestler who was a cast member of the popular reality show "Terrace House," killed herself in May 2020 after she was subject to intense harassment and abuse through social media by people who watched the show.

Her mother, Kyoko, 52, filed a lawsuit with the Tokyo District Court on Dec. 6 seeking about 142 million yen ($1 million) in compensation.

“I wanted to avoid a court case, but I was forced to file the lawsuit because no sincere response was made by (the defendant companies),” Kimura said at a news conference held after the lawsuit was filed. “I do not want any further exploitation of the dreams of young people.”

The companies named in the suit are broadcaster Fuji Television Network Inc., production company E&W Inc. and East Factory Inc., which eventually took over production operations from E&W. When “Terrace House” was broadcast, E&W was known as East Entertainment Inc.

In the lawsuit, the plaintiff argues the producers of “Terrace House” created a “structure that made cast members easy targets by aggressively publicizing that the show was real.”

The lawsuit said the nature of the show meant the cast members were put in the firing line. And it said the producers had a responsibility to deal with any backlash or defamation that generated by monitoring the physical and psychological health of Hana during the shooting, editing and streaming of the program.

In March 2021, the Broadcast and Human Rights Committee of the Broadcasting Ethics and Program Improvement Organization (BPO) highlighted ethical problems with the program. But it stopped short of concluding that Hana’s human rights had been violated because some action had been taken, such as providing mental health care before the show aired.

The lawsuit said cast members who viewed and reacted to footage from the show in the studio would frequently make negative comments about what Hana did or said in the program and that had encouraged the backlash on social media.

Kimura said she felt the producers treated the cast members like they were disposable.

“(If I were in their position,) I would not have been able to do the same thing if a family member or someone I loved appeared on the program,” Kimura said. “I wanted the producers to treat the cast members as human beings.”

The three defendant companies refrained from commenting, saying they have yet to receive the lawsuit.

Last year, a Tokyo court ruled in favor of Kimura in a separate lawsuit, where it ordered a man to pay 1.29 million yen for posting hateful messages about Hana on Twitter.

(This article was written by Kyota Tanaka and Takuro Negishi.)