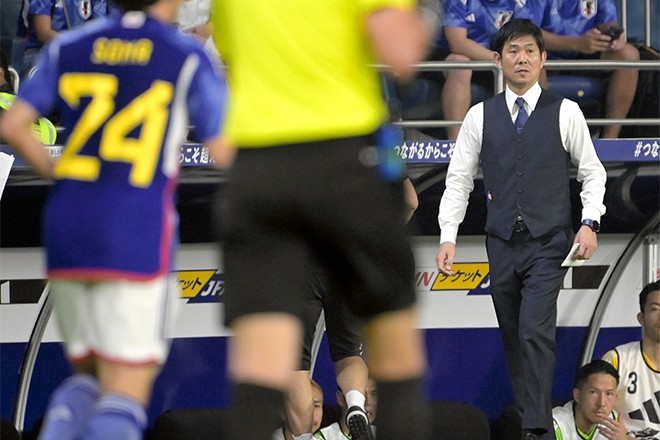 Hajime Moriyasu, skipper of the Japan national soccer team, holds a notebook in his left hand during a pre-World Cup friendly match against Canada in Dubai on Nov. 17. (Tatsuo Kanai)

When Japanese national team coach Hajime Moriyasu would scribble in a notebook during a World Cup match, speculation as to the contents ignited a firestorm on social media.

Could it be Moriyasu's "death note"? Was the name written being sentenced to "death," the next team to bow in defeat before the powerful Samurai Blue?

Whatever the "secret message," the innocuous action broadcast live across the globe also caught the attention of a major stationery maker in Japan that produced the notebook.

“We want to convey our thankfulness to the head coach,” said a representative of Kokuyo Co., an Osaka-based company with a 117-year history, of Moriyasu, who guided the Japanese team to the final 16.

During the matches in Group E throughout the tournament, Moriyasu, standing on the sidelines of the pitch, was often seen reaching into his suit jacket and taking out a notebook.

He would write something down, while glancing toward the action.

The notebook Moriyasu used is apparently a product of Kokuyo, which was established in 1905.

Reportedly, the Japanese coach was jotting down what he noted was transpiring on the pitch.

As people buzzed about the role of the note-taking in the fate of the teams in the so-called “Group of Death” on social media, Kokuyo employees’ eyes were glued to the pad in Moriyasu's hand.

Some Kokuyo employees had known that Moriyasu regularly uses the company’s “Campus” series notebook, typically a B-6-size with 6-mm lines or an A-6 size.

The buzz reached the ears of Hidekuni Kuroda, Kokuyo's president.

A representative of the company said about Moriyasu’s choice, “We are genuinely happy.”

“Digitalization and things going paperless have decreased the opportunity for people to write in a notebook,” the representative said, adding that notebooks in general have rarely attracted attention as an everyday item.

“But we believe that (Moriyasu) has felt the power of note-taking,” the representative said.

As a token of appreciation, the company is considering presenting a notebook to the Samurai Blue coach.

The company said it has yet to contact the Japan Football Association about its proposal, and the design of the gift has yet to be decided.

“This is like a one-sided love, but we hope we can express our appreciation in a concrete manner,” the representative said.