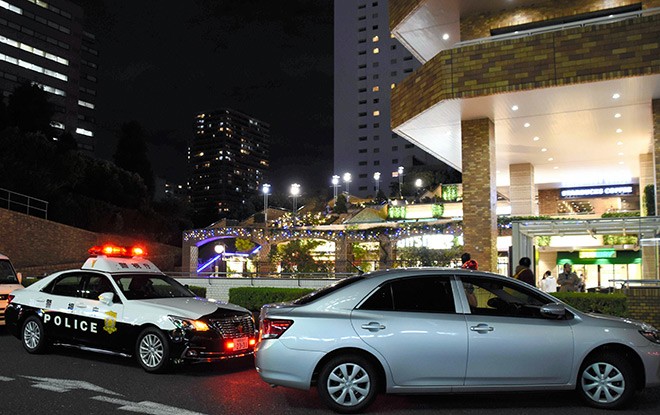 Police cars are parked in front of the Sunshine 60 skyscraper in Tokyo’s Ikebukuro district on Oct. 16. (Shoko Mifune)

Metropolitan police arrested the leader of a faction within the Chinese Dragon, a loosely organized crime group, over a brawl with another faction in October that broke out near the top floor of a skyscraper in Tokyo.

The 51-year-old leader of the faction from the capital's Ueno district was arrested on Dec. 7 along with four other individuals on suspicion of trespassing and forcible obstruction of business, according to police.

They were some of the roughly 70 people, mostly belonging to that faction, who gathered near the 60-story Sunshine 60 skyscraper in the Ikebukuro district on Oct. 16, as captured on the building's security cameras.

The footage showed dozens of people, including the quasi-gang members, enter the elevators around 6:20 p.m. and then get off on the 58th floor, where the brawl took place.

Around 100 people, mainly members of another faction of the Chinese Dragon based in Tokyo’s Akabane district, had started a party at the French restaurant 20 minutes earlier. They were celebrating their former leader being released from prison.

The restaurant staff called emergency services at around 6:30 p.m. When police officers arrived at the scene, only two people remained in the restaurant.

The five arrested were among those who stormed into the restaurant.