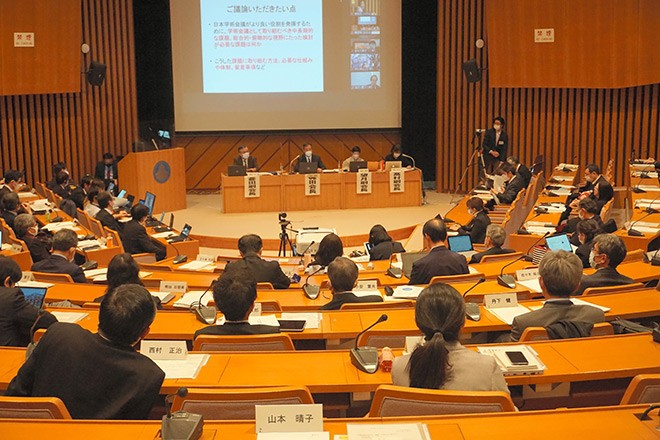 The government has announced a set of proposals to reform the Science Council of Japan. Any plan to overhaul the council should be based on the principle that its independence is vital for its ability to offer productive proposals for the government and society.

Three pillars of the reform blueprint released by the government on Dec. 6 include enhancing the council’s ability to cooperate with and advise the government and business community based on shared perceptions about key challenges for society and proper time frames for tackling them.

The government has also called for the involvement of outsiders in selecting new council members.

It said the council should seek recommendations from outside parties, and that an independent advisory committee for member selections be set up.

Another key proposal is to ensure transparency in the council’s operations and management while bolstering the powers and functions of the existing third-party committee to evaluate the council’s performance.

The Science Council’s core mission is to present meaningful visions by drawing on its reservoir of expert knowledge from long-range and broad perspectives. Such visions tend to be absent in the government’s often myopic policymaking and the economic logic of focusing on short-term profits.

The council is expected to identify important but unrecognized challenges and make policy proposals that neither the government nor the business community can easily come up with.

Its performance would be seriously affected if it cannot see and understand things from a viewpoint independent of the government and loses its diversity of views and opinions.

Many advisory councils are filled with people willing to support the government’s ideas and endorse its policies.

If the Science Council becomes a similar panel, its high-caliber experts will be unable to make their best contributions to society.

Political calls for revamping the Science Council first emerged in 2020, when then Prime Minister Yoshihide Suga refused to appoint six members who were nominated by the council. When his decision came under fire, Suga tried to shift the focus of the controversy to the reform of the council.

Diverse viewpoints obviously should be considered in selecting new council members. If the government stresses the importance of transparency in the selection process, however, it should set an example by explaining why and how the six candidates were rejected.

If the envisioned third-party committee involved in selecting council members is stocked with people catering to the wishes of the government, similar problems could occur in different forms.

There is no doubting the need to ensure transparency in the council’s operations and management and heeding the opinions of outsiders.

But the council itself should be the one carrying out such reforms. It has actually been making efforts for improvements.

If the third-party evaluation committee’s membership and powers are changed in line with the government’s intentions, the council’s independence would be fundamentally undermined.

The government decided to maintain the Science Council’s status as a government organ that receives state funding and not turn it into an independent corporation as had been proposed.

But the guidelines have left the door open to this path by saying the proposal will again be considered when the council’s reform efforts are reviewed in three and six years.

The council will discuss the government’s proposals at its general meetings on Dec. 8 and 21.

The government plans to work out details of the proposals and introduce a related bill in the ordinary Diet session scheduled to convene early next year.

The government should recognize afresh the core value and role of the council as it drafts the bill while paying serious attention to the views and opinions of the council members.