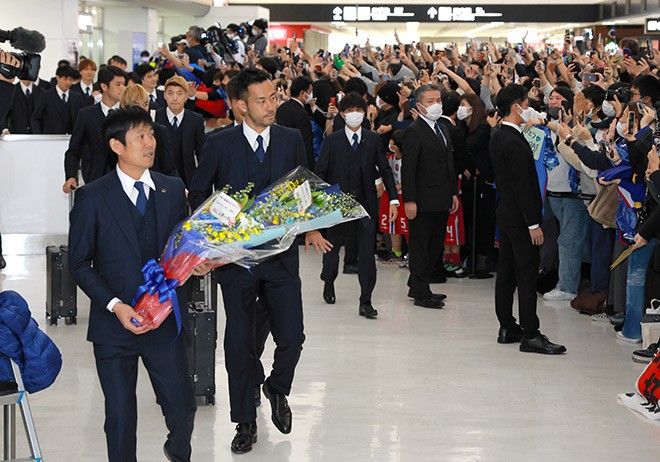 Japan’s national soccer team is welcomed by a crowd of fans at Narita Airport in Chiba Prefecture upon their return from the World Cup in Qatar on Dec. 7. (Tetsuro Takehana)

Japan’s national soccer team members received a warm welcome upon their return home on Dec. 7 despite failing in their historic bid to make the final eight at the World Cup in Qatar.

Some 650 supporters, including those wearing the team’s blue uniform, packed the arrival lobby of Narita Airport near Tokyo to salute the Samurai Blue players, head coach Hajime Moriyasu and staff.

“I did not expect that Japanese people would be so delighted,” Moriyasu said at a news conference held at a nearby hotel.

“Fans thanked us but we should be thanking them,” he said with a smile.

Team captain Maya Yoshida said, “It was our shortest World Cup so far (in terms of schedule), but it was the most enjoyable.”

“I hope that more children will come to like soccer and that Japan soccer will develop more,” he said.

The team was unable to advance to the quarterfinals, but it finished at the top of Group E, beating two former World Cup champions, Germany and Spain.

Moriyasu said, “We were unable to go beyond the round of 16, but players showed us a new era.”

Yoshida said, “This time, I felt that we got through a difficult period and fought together. The unity (of supporters) encouraged us.”

The World Cup marked the first time on the global stage for 19 of the 26 Japanese players.

Yoshida said, “I was so emotional that I don’t remember what I said” at the team’s last meeting in Qatar.

But he said he told the younger players, “We will get more attention. Let’s increase the popularity of soccer.”

Yoshida also thanked veterans such as Yuto Nagatomo and Eiji Kawashima, who took part in four straight World Cups, for having supported the team.

“They always added positive aspects to the team. They did a ‘bravo’ job,” he said, echoing Nagatomo’s buzzword during the competition.

However, Yasuharu Sorimachi, technical director of the Japan Football Association, said, “I take this result as a disappointment. We can say that the wall to the quarterfinals seems high but it is low. But we can also say it seems low but it is high.”

Sorimachi said the players are voicing their opinions that they “want to win by taking the initiative.” He said the JFA’s Technical Committee will review their performances in the matches.

JFA President Kozo Tashima was asked about candidates for the next coach to take the reins of the Samurai Blue.

“The technical committee will discuss it thoroughly and hand its decision to the board of directors,” Tashima said. “So, I don’t have the answer. Sorimachi will take the lead.”