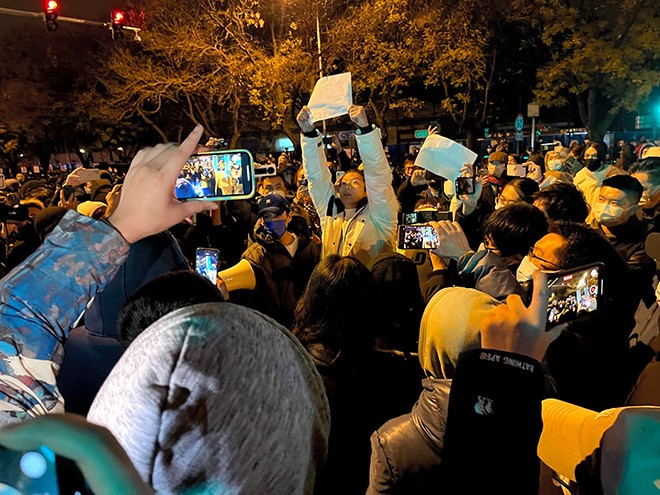 Protesters hold up blank sheets of white paper in protest of the Chinese authorities’ handling of the novel coronavirus in Beijing on Nov. 27. (Nozomu Hayashi)

They also said they would wait and see if the easing would actually be implemented, however, and what the lifting would do to the number of COVID-19 cases in the nation.

The policy shift was taken as good news, particularly for the Japanese auto industry. The auto makers' factories in China were forced to shut down under the Chinese government’s zero tolerance policies for COVID-19. Their factories at home also had to suspend operations because of the resulting disruption in supply chains.

A senior official of a leading carmaker welcomed the easing of the curbs, calling it “a positive step.”

“Managing production will become easier at our factories,” the official said. “We have been at the mercy of the Chinese government’s policy, and I am hoping they will move in a direction that will make it easier for business.”

The company’s factories in China were repeatedly forced to halt operations because employees were barred from going to work under the virus-control measures, though they had no problem with auto part supplies.

An official with Daihatsu Motor Co. voiced a similar sense of relief.

“It would be most welcome if loosening restrictions leads to smooth supply distribution and the swift delivery of our vehicles to customers,” the official said.

Daihatsu had to suspend operations at its factories in Japan due to a delay in procuring auto parts.

“China is embedded in the global supply chain and plays a crucial role,” he said at a Dec. 7 news conference in Takamatsu, Kagawa Prefecture, which he was visiting. “Switching to living with the novel coronavirus is a welcome step as we expect supply chains to be put back on the move.”

Many Japanese executives, however, said they are not sure whether the loosening could lead to a general overhaul of the Chinese government’s anti-coronavirus policy.

“China has more or less contained the virus, but lifting the rules can be a concerning development because we don’t know how virus caseloads will move in the months ahead,” the Daihatsu Motor official said.

Though business activities are expected to return to normal in China, hordes of Chinese tourists are unlikely to descend on Japan anytime soon.

The Chinese government has yet to approve of citizen group tours abroad. The COVID-19 directive issued on Dec. 7 did not include any mention of tourism.

A senior official with a travel agency specializing in trips to Japan said group tours to Japan will not likely be permitted soon.

HOPES FOR A BETTER ECONOMY

The relaxing of novel coronavirus rules has raised hopes that the Chinese economy will perform better. Beijing’s strict policy has been blamed as the largest factor in dragging down the nation’s economic growth.

The Chinese economy grew only 3 percent year on year from January to September largely because production and consumption were disrupted due to a lockdown in Shanghai and in other parts of China in the spring.

Nomura International (Hong Kong) Ltd., a company under Nomura Holdings Inc., upgraded its forecast for China’s economic growth to 4.8 percent, from 4 percent, for 2023 in its report on Dec. 7, adding that Beijing will finally emerge from the “zero-COVID” trap it had set for itself.

Analysts say, however, it is still difficult to predict how the Chinese economy will perform, or if the plans to loosen COVID-19 protocols will even be implemented as promised.

“Chinese authorities put Shanghai back under stringent restrictions as soon as cases surged in autumn despite a vow to relax them after a two-month-or-so lockdown was lifted in the city in June,” said Norihiro Fujito, a senior investment strategist at Mitsubishi UFJ Morgan Stanley Securities.

He also noted that the property market, which was a driving force of the Chinese economy, remains stagnant.

“It is premature to assume the global economy will improve even if the Chinese government goes through with easing its COVID-19 rules,” Fujito said.

(This article was written by Akihiro Nishiyama in Beijing and Kenta Nakamura and Takehiro Tomoda.)