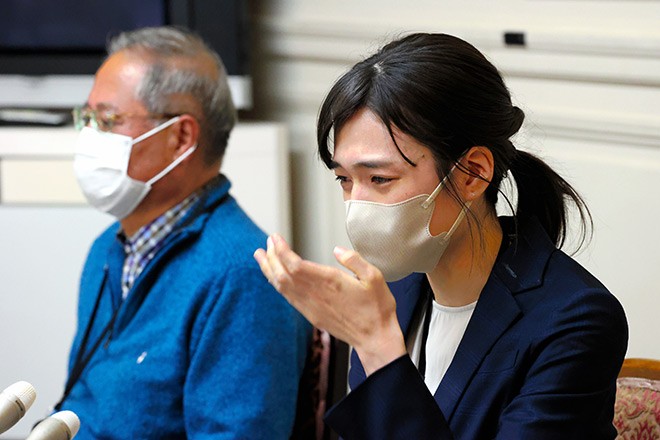 A second-generation former member of the Unification Church speaks at a news conference held in the Diet on Dec. 8. (Koichi Ueda)

A government-drafted bill to restrict organizations’ unscrupulous practices to collect donations and raise funds passed the Lower House on Dec. 8 and is expected to become law after passage by the Upper House on Dec. 10.

Will it really provide effective relief to victims and prevent recurrences? Will it negatively affect legitimate efforts to seek donations?

While the legislation represents a meaningful step forward, many questions remain.

Since former Prime Minister Shinzo Abe was killed in July, attention has focused on activities of the Unification Church, formally known as the Family Federation for World Peace and Unification. The church's questionable tactics include “spiritual sales” and pressuring followers into making extremely large donations.

This has triggered calls for legislation to crack down on such practices from among former adherents, their families and lawyers involved in supporting victims.

Five months on, new legislation to tackle the problems is about to be enacted. The speedy process is something to be lauded.

But the Lower House passed the bill only five days after it started considering it. That strikes us as being a rash act.

There are many elements in the provisions that are not crystal clear. After examining deliberations at the Upper House, the government should offer clearer interpretations of potentially confusing passages and take steps to make them widely known.

The law will cover activities of not just religious groups but all kinds of organizations that collect donations, including nonprofit organizations and schools.

Because of the wide coverage, the law has strict criteria for “prohibited acts” that can qualify as punishable crimes.

The criteria include taking advantage of the anxiety of targeted consumers as well as inspiring fear in their minds with the claim that a donation is “indispensable” for avoiding being put in a disadvantageous situation.

Critics have argued this requirement could narrow the range of victims who can receive relief. But it has been maintained nevertheless.

In a rare occurrence, talks over the bill for revisions and improvements between the ruling and opposition camps continued even after the Cabinet endorsed it. Some notable improvements have been made as a result.

The provisions oblige organizations to make efforts not to pressure the free will of potential donors or force them into a situation that makes it difficult to properly exercise judgment.

As a result of the revisions, the government can issue an administrative admonition to or publish the names of organizations that fail to comply with this “obligation.”

But such tactics have been used by the church in seeking donations and have already been acknowledged to be illegal in court rulings.

Cautious consideration should continue as to whether these and other practices should be added to the list of “prohibited acts.”

As for measures to provide relief to families of victims, the law will allow families of followers to exercise the followers’ right to cancel their donations on their behalf as a special case of the so-called “obligee’s subrogation right” under the Civil Code.

But this provision can be applied only when the followers themselves do not have the financial wherewithal to take the action. The amounts that can be demanded by spouses and children of victims are also limited.

It is vital to set up a review panel of experts to examine actual cases covered by the new law and evaluate its effectiveness.

The key measure for the success of the new law is whether it will make it easier for victims to file lawsuits after falling prey to unscrupulous tactics for collecting donations.

But it will also depend on the Consumers Affairs Agency issuing admonitions and orders under the law in a swift and appropriate manner.

An effective system should be created to compile and share information received by consumer centers and the Japan Legal Support Center for quick analyses and actions.

When asked during a Diet session whether policy debate on activities of religious cults is also needed, Prime Minister Fumio Kishida said the proposal should be considered in the future.

The new law will be reviewed in about two years after it is put into force, according to the government. The government and the Diet should consider whether additional legislative measures will be needed to tackle this social problem.