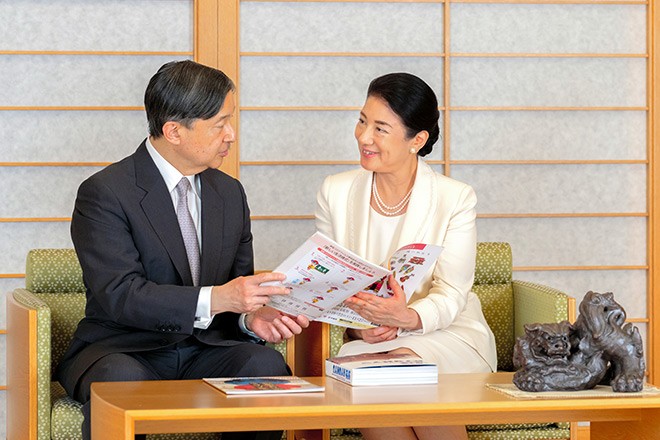 Empress Masako talks with Emperor Naruhito in the Imperial Palace on Dec. 5 while looking at an official guidebook of cultural festivals held in Okinawa Prefecture. (Provided by the Imperial Household Agency)

Empress Masako said she is grateful for the support she has received for half of her life as part of the imperial family as she turns 59 on Dec. 9.

“I am deeply moved to have spent exactly half of my life in the imperial family,” she said.

Masako married Emperor Naruhito, then the crown prince, in June 1993, almost 30 years ago.

Masako reflected on her life as she enters her last year of being in her 50s.

“I have gone through many times of joy and sometimes sorrow as well,” she said in a statement released by the Imperial Household Agency.

She expressed her heartfelt gratitude to Emperor Emeritus Akihito and Empress Emerita Michiko and many other people “for supporting me every step of the way and watching over me.”

She also praised the Japanese national soccer team, which reached the round of 16 after beating former champions Germany and Spain at the World Cup in Qatar.

She said the team “moved many people and gave them big dreams and courage to face difficulties, providing an opportunity for the people of Japan to unite in our hearts.”

Citing the prolonged COVID-19 pandemic and recent rising commodity prices, Masako said, “My heart breaks when I think about the many people living with various difficulties.”

She resumed visits to regional areas in October with Naruhito after they were halted for nearly three years due to the pandemic.

“I was more delighted and grateful than I had imagined for being warmly welcomed with smiles by so many people in each area,” she said.

A team of doctors treating Masako’s adjustment disorder released a statement on the state of her health.

“It would be desirable for Her Majesty to continue to work while regulating her health,” the statement read. “This will give her more confidence.”

They said she is still recovering and that her condition is unstable.