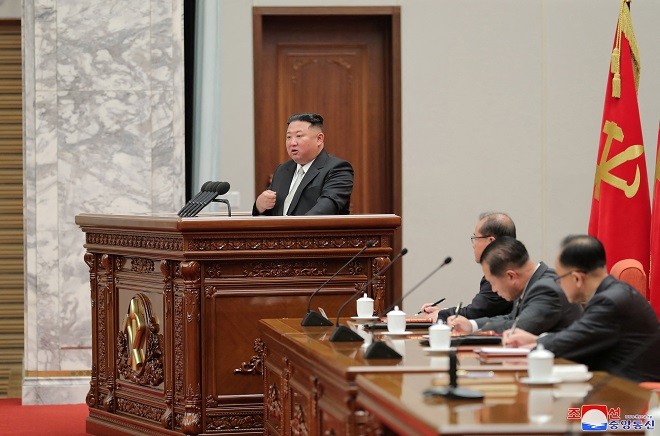 North Korean leader Kim Jong Un attends a session of the sixth enlarged meeting of the eighth Central Committee of the Workers’ Party, in Pyongyang in this photo released on January 1 by North Korea’s Korean Central News Agency (KCNA). (KCNA via Reuters)

North Korea will likely continue to dominate headlines in the year ahead, and there are signs its leader, Kim Jong Un, is “nervous” about how world events will play out.

This assessment was given by Ko Young-hwan, the former deputy head of the South Korean Institute for National Security Strategy. Before defecting to South Korea in 1991, Ko was a diplomat in Pyongyang who served as an interpreter of French for the country’s founder, Kim Il Sung.

Ko shared his views with The Asahi Shimbun. Excerpts of the interview follow:

Question: What is New Year’s Day like in North Korea?

Ko: The first day of the year is a national holiday just like in other countries, but senior officials of the military and the ruling Workers’ Party of Korea (WPK) are busy that day to start a “new battle.”

They normally convey the supreme leader’s words to all party members and staffers at each workplace in the morning. They decide a new combat policy based on these words in the afternoon.

The North Korean foreign ministry, where I worked, liked to develop “tactics to win in diplomacy against the United States” or things like that. The developments in these resolution meetings are then expected to be broadcast in various regions and workplaces.

Q: What is your view on a national policy agenda report by Kim Jong Un unveiled at an enlarged plenary meeting of the WPK’s Central Committee late last year?

A: At the core of the report is a phrase that refers to South Korea as becoming “our undoubted enemy.” This underlines the nation’s strategy of dealing with the hard-line stance adopted by Washington and Seoul toward Pyongyang from a long-term perspective, based on the conclusion that those countries have no intention of changing course in policy.

It calls for an “exponential increase of the country’s nuclear arsenal” in the process, but the declaration can be deemed in part as a bluff. The North seemingly does not have enough funds to achieve that.

The report at the same time stresses the necessity of bolstering national defense capabilities while asking for patience among North Koreans during that process.

Q: What do you think of the Dec. 31 ceremony held in front of the WPK headquarters to commemorate the delivery of 30 super-large 600-millimeter multiple rocket systems?

A: My opinion is that this extremely rare event underscores Kim Jong Un’s strong sense of nervousness. How China-North Korea trade will play out remains unclear given the latest rapid spread of the novel coronavirus in China. The international community continues to impose sanctions against North Korea. In this difficult situation, Pyongyang has no choice but to rely on force.

Q: What have your sources told you about the most recent developments in North Korea?

A: North Korea closed its borders in January 2020 in an attempt to prevent the novel coronavirus from spreading in the country. Even diplomats are not allowed to leave the North for other countries. Little information of significance currently reaches us from Pyongyang.

I have, however, received some reports about the tough situation in regions around the North’s border with China. North Korea apparently imported 40,000 tons of rice from China between September and October last year. Importing the crop during the harvest season indicates it faces terrible food shortages. There are reports that top officials in the party and the military are not getting their proper share of foodstuffs.

Q: Why does Pyongyang bestow such absolute titles on Kim Jong Un, for example, calling him the “sun” for the people and the “great leader” in news reports?

A: Kim Jong Un is struggling with a huge dilemma. He was selected as the leader from among the relatives of Kim Il Sung, who are collectively referred to as the Mount Paektu bloodline.

His father, Kim Jong Il, was a son of Kim Il Sung, and grabbed power after emerging victorious in family battles against his younger half-brother, Kim Pyong Il, and his stepmother, Kim Song Ae. In the past, Kim Jong Il said it “is enough to describe me as a beloved leader since there is only one great leader.”

Kim Jong Un is seemingly trying to emphasize he is as great as his grandfather Kim Il Sung. For that reason, he wants people to call him the “great leader” like his grandfather. This approach is known as the absolutization of power in North Korea, and almost all potential measures to achieve this have already been taken.

Q: Kim Jong Un’s daughter, Kim Ju Ae, suddenly made an appearance in state media this past autumn. What are your thoughts on that?

A: At the sight of Ju Ae, senior personnel in North Korea must have thought Kim Jong Un is looking to retain the current hereditary system. It sent a clear message that he has no plans to give up power.

But Ju Ae cannot be his successor. His first son will take over from him. The son has yet to be shown to the public because doing so would result in political turmoil. Bringing his son out into the open will cause senior officials to regard him as the future leader and line up in front of him. That would damage Kim Jong Un’s authority. The late Kim Jong Il had not decided who would replace him until he was stricken by a cerebral stroke.

Q: What approach do you think North Korea will take in 2023?

A: There is a possibility that the relationship between Pyongyang and Tokyo, as well as Washington and Seoul, will reach the worst point ever. The North may launch what it calls satellite carrier rockets, while intercontinental ballistic missiles (ICBMs) could be launched at normal trajectories, closer to conditions of actual warfare compared to the past when it “lofted” them high into space, as Kim Yo Jong, a younger sister of Kim Jong Un, asserted.

There is also a likelihood that Pyongyang will resort to military provocations against Seoul along the lines of the March 2010 sinking of a South Korean patrol vessel.

These possible acts would function as a double-edged sword for China, its largest advocacy nation. A certain level of provocation would help divert Washington’s attention, but going too far could prompt the United States to beef up its military capability in East Asia and further bolster ties among Tokyo, Washington and Seoul.

North Korea has the potential to remain a terrible troublemaker for East Asia in 2023 on a continual basis.