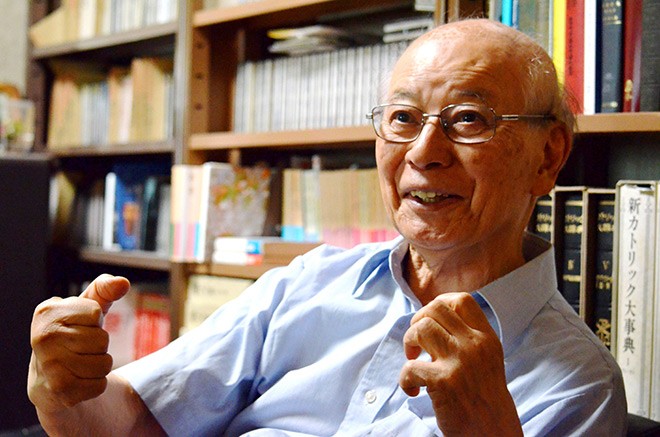 Thirty years ago, the University of Tokyo’s entrance exam in Japanese contained a reading comprehension question that began as follows:

“This is something I felt one day. Gazing up at the stars, I keep witnessing them above my head as far as my eyes can see. And there are stars under my feet, too. In short, we are tossed into an infinite world.”

The passage, attributed to author and psychiatrist Otohiko Kaga, continued, “Humans only exist for a limited time.”

It was his way of explaining how small our presence is in time and space when compared with the vast universe.

The test asked examinees to read the passage and write their thoughts, which must have made their heads spin.

They were challenged to grapple with some of the most fundamental questions about human existence: What is death? And what does it mean to be alive?

In his younger years, he served as a medical official at the Tokyo Detention House and interacted with many death row inmates and prisoners serving life sentences.

He realized that prisoners on death row, who knew they could be executed the next day, lived in a state of agitation with their time “extremely condensed.”

In contrast, those imprisoned for life deliberately avoided thinking about death and lived quietly in an “infinitely diluted time.”

Our consciousness of death probably lies somewhere in the middle of those two extremes.

But Kaga noted in his book “Sei to Shi to Bungaku” (Life, death and literature) that we must at times emulate death row inmates and “confront our mortality in all seriousness.”

If not, he warned, “it will be too late when we suddenly find ourselves faced with death.”

Death is the surest future for everyone.

Many people, including myself, tend to shun thinking about it, but Kaga preached the importance of our society squarely facing up to it.

“There is nothing to be afraid of,” he wrote in his autobiography.

He died of old age.