Kumamoto court rules in favor of victims of forced sterilization 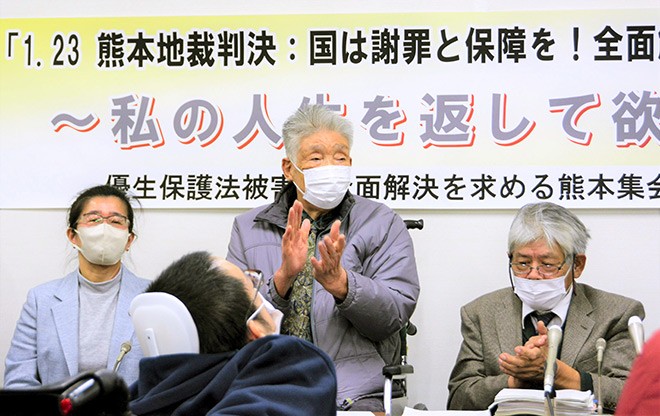 Kazumi Watanabe, center, one of the plaintiffs, expresses delight at the ruling by the Kumamoto District Court at a meeting in Kumamoto on Jan. 23. (Kei Yoshida)

KUMAMOTO--The district court has ordered the central government to pay compensation to a man and woman who were forcibly sterilized more than half a century ago under Japan’s now-defunct eugenics law.

It ordered the government on Jan. 23 to pay 15 million yen ($115,000) to the man and 7 million yen to the woman, calling the operations performed on them unconstitutional and “extremely inhumane” for denying them the “fundamental act of producing descendants.”

The two from Kumamoto Prefecture had sought damages of 33 million yen each, arguing that the forced sterilization operations performed on them under the former Eugenic Protection Law were unconstitutional.

Although the total compensation payout falls short of their claim, their lawyers hailed the ruling as a milestone victory that paves the way for more like it.

“This is a big step forward toward other rulings that will be given by district courts,” said Yasuyuki Tokuda, one of their lawyers.

Similar lawsuits were filed with 10 district courts or district court branches across Japan, according to the plaintiffs’ legal team.

The latest ruling was the third case where the courts ruled in favor of the plaintiffs, following the two cases reviewed by high courts.

Under the 1948 Eugenic Protection Law, people with certain illnesses or disabilities were forcibly sterilized until 1996, when forced sterilization was made illegal and the law was renamed.

The ruling by the Kumamoto District Court recognized that the man and the woman underwent sterilization operations sometime around 1955 and 1971, respectively.

The ruling said the operations were performed “based on the discriminatory belief that all people with certain disabilities or illnesses are inferior.”

The government argued during the trial that the 20-year statute of limitations should apply.

The district court’s ruling acknowledged that 20 years have passed, yet ultimately concluded the rule should not apply in this case.

It reasoned that it should not apply because of the significance of the harm done, along with the grave responsibilities held by the government for actively carrying out the policy, which spread prejudice and discrimination as a result.

The court reasoned that it was also difficult for the victims to seek damages from the government for a long time because it would not acknowledge its wrongdoing until the enactment of a lump-sum compensation law in April 2019.

The ruling concluded that denying the plaintiffs the right to seek damages by applying the statute of limitations would “significantly go against the idea of justice and fairness.”

According to the plaintiffs’ legal team, all seven rulings that have already been handed down by district courts had dismissed the plaintiffs’ arguments by invoking the statute of limitations.

However, the Osaka and Tokyo high courts last year reversed district court rulings by deciding to restrict the application of the statute and ordering the government to pay compensation to the plaintiffs.

Ko Misumi, another lawyer for the plaintiffs, praised the Kumamoto District Court for declaring that the statute of limitations does not apply.

“It’s a more progressive ruling than those given by the Osaka and Tokyo high courts,” Misumi said.

The health ministry issued a statement acknowledging that the government’s argument was not accepted but refrained from commenting on the ruling.

“We would like to scrutinize the ruling and respond appropriately,” it said.

(This article was written by Kei Yoshida and Rina Horikoshi.)