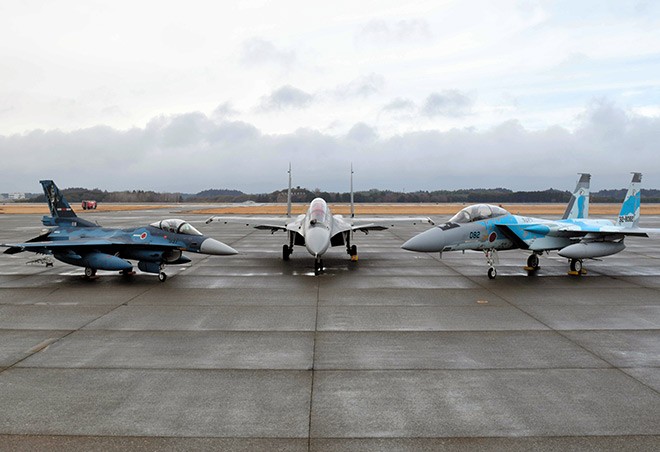 From left, an Air Self-Defense Force’s F-2 fighter jet, an Indian Air Force Sukhoi 30-MKI fighter jet and an ASDF F-15 fighter jet are seen in a joint exercise at Hyakuri Base in Ibaraki Prefecture on Jan. 23. (Kaigo Narisawa)

Japan and India are holding a joint military exercise to step up their deterrence against China, which is increasing its influence in South Asia and the region around the Indian Ocean.

The drill, featuring Russian-made fighter jets, is the first joint air combat training between the two countries held in Japan.

“Training with the real thing will reveal what (the jet) is like,” an Air Self-Defense Force official said.

The exercise, which is being conducted at the ASDF's Hyakuri Base in Ibaraki Prefecture from Jan. 16 to 26, was agreed to at the first Japan-India foreign and defense ministerial meeting in November 2019.

The Indian Air Force’s Sukhoi-30, a multi-role fighter aircraft capable of anti-air, anti-surface and anti-ship attacks, was developed by the Russian manufacturer Sukhoi.

It was manufactured in Russia and exported to countries that include China, Indonesia, Kazakhstan, Malaysia and Vietnam. Russia has reportedly deployed the aircraft in its invasion of Ukraine.

Although Chinese Sukhoi-30 have been spotted near Japanese airspace, detailed data of the aircraft remain unknown to ASDF officials.

“It will be a rare opportunity to assess the aircraft’s performance,” the ASDF official said.

Commander Pankaj Mohan Sinha from the Indian Air Force's Western Air Command joined a flight of ASDF F-2 fighters on Jan. 23. He told reporters he was inspired by the remarkable skills of the Japanese pilots and that he plans to hold another drill in India as early as the end of 2023.