Drivers stranded on expressway in Mie, Shiga due to heavy snowfall

Heavy snowfall leaves a large number of vehicles stranded on the Shin-Meishin Expressway near the prefectural border between Shiga and Mie on Jan. 25. (Video by Asahi Television Broadcasting Corp.) 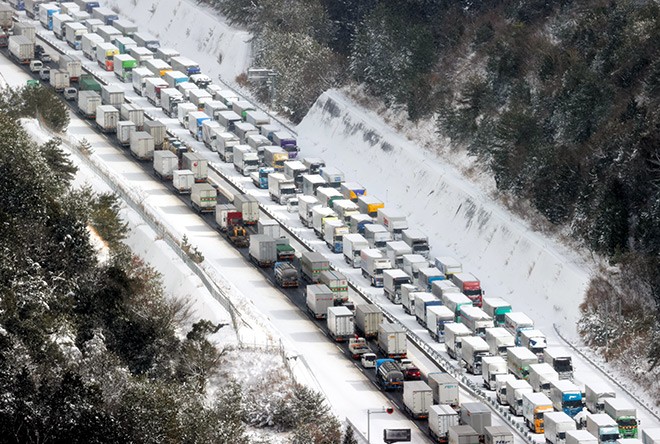 Many trucks and cars are stuck near the Koka-Tsuchiyama Interchange on the Shin-Meishin Expressway bound for Kobe in Koka, Shiga Prefecture, at 1:15 p.m. on Jan. 25. (Yuki Shibata)

Heavy snowfall that swept through the mountainous areas of Mie Prefecture has trapped scores of drivers in a massive traffic jam straddling two prefectures.

Many vehicles, including large trucks, remain stuck in these sections, according to Central Nippon Expressway Co.

Officials from the company are providing relief supplies, such as food, water and portable toilets, to the drivers and passengers stuck there.