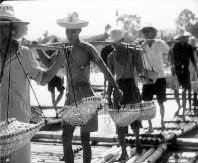 A scene from “Romusha” shows Indonesian laborers carrying soil as they chant “Kill them all!” and “Our enemies!” in chorus. (Provided by Ise Film)

Shinichi Ise spent 30 years retracing the wartime footsteps of his father, who edited propaganda films in Indonesia, a country occupied by Japan during the Pacific War. [Read More]