What is the 'comfort women' issue all about? 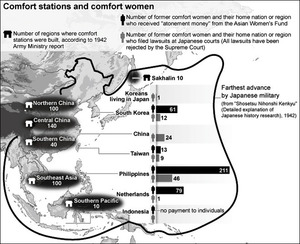 Q: What are comfort women?

A: Women who were forced to serve as sexual partners of military personnel at comfort stations created under the involvement of the Japanese military during a time of war. In the statement released by the government in August 1993 under the name of Chief Cabinet Secretary Yohei Kono (the Kono statement), there was wording that said, "this was an act, with the involvement of the military authorities of the day, that severely injured the honor and dignity of many women."

Q: What kind of people were forced to become comfort women?

A: Besides Japanese who lived in Japan proper, women from the Korean Peninsula and Taiwan, which were under Japanese colonial rule, were also made to become comfort women. In line with invasions by Japan, comfort stations were also created in China, the Philippines, Burma (present-day Myanmar), Malaysia and other areas. Local women were sent to those comfort stations. In Indonesia, which was under Dutch colonial rule at that time, Indonesian women as well as Dutch women who were living there at the time were made to become comfort women.

In 1938, the government issued a directive that said Japanese women who were to go to China to work as comfort women should be limited to "prostitutes who were 21 years or older." This was likely because of a treaty banning the sale of women and children which prohibited human trafficking or prostitution of women under 21 or children. However, when the government ratified the treaty in 1925, it exempted its colonies from coverage under the treaty. For that reason, girls who were still minors and not prostitutes in the colonies and occupied areas also became comfort women. There are records of girls as young as 17 in the Korean Peninsula and 14 in Taiwan who became comfort women.

Q: How many comfort women were there?

A: Because there are no official records for the total number, there are only various estimates made by researchers. Ikuhiko Hata, a historian of the contemporary period, made an estimate in 1993 of between 60,000 and 90,000. In 1999, he revised that estimate to about 20,000. Yoshiaki Yoshimi, a professor of modern and contemporary Japanese history at Chuo University, made an estimate in 1995 of between 50,000 and 200,000. Recently, he has revised that figure to more than 50,000. There are people in South Korea and China who have given much higher figures.

Q: When and how were comfort stations created?

A: In 1932, the year after the Manchurian Incident, rapes of Chinese women by Japanese soldiers occurred during the Shanghai Incident. According to some records, in order to prevent a heightening of anti-Japanese sentiment, groups of comfort women were invited from Kyushu exclusively for military personnel and civilian workers for the military. Subsequently, other reasons that were given for creating comfort stations were to prevent a decline in war capability due to the spread of sexually transmitted diseases as well as to prevent the leaking of military secrets and to provide comfort to military personnel.

Q: How were the comfort women gathered?

A: In many cases, agents who acted in line with the military's intentions, recruited women first in Japan and then in the colonial areas of the Korean Peninsula and Taiwan. It has also been known that there were many cases in which the women were fooled by being told, "There is good work available," or in which they were sold off by their parents.

Q: What was the life of comfort women like?

A: On the Internet site of the Asian Women's Fund, there is wording that says "while it was certain soldiers directly or indirectly made payments (at the comfort stations), it is unclear how that money was given to the comfort women." It is believed that there were differences in how the women were treated depending on the location and the status of the war.

In 1993, the government also released the results of its investigation along with the Kono statement. The report said the women "were forced to lead a life without freedom since they were made to act along with the military while always being under military supervision in the front lines of combat."

Q: How did the comfort women issue become to be known in Japan?

A: From shortly after the end of the war, accounts of their experiences given by military personnel made mention of such women. In June 1970, Kako Senda wrote in the Shukan Shincho weekly magazine about accounts given by women who said they were made to work as comfort women along with statements made by those who once had ties to the military. In 1973, he published a reportage titled "Jugun Ianfu" (Military comfort women). At that time, the women were considered as part of a secret history of the war.

Q: How did the topic become an issue of interest between Japan and South Korea?

A: In January 1990, Yun Chung-ok, a professor at Ewha Womans University, wrote a series of articles in The Hankyoreh newspaper in South Korea about the comfort women issue titled "A Report of Coverage of Footprints of Grudge of The Volunteer Corps." The visit in May 1990 by South Korean President Roh Tae-woo to Japan served as a catalyst for an increase in calls seeking an apology and compensation from Japan by South Koreans who were made to serve in the Japanese military or work as civilians for the military on the Korean Peninsula, which was under Japanese colonial rule.

August 1991: Former comfort woman in South Korea comes forward about her past for the first time.

August 1993: Chief Cabinet Secretary Yohei Kono issues a statement acknowledging the recruitment, transfer and control of women were conducted generally against their will and expressing "apologies and remorse." (Kono statement)

August 1994: Prime Minister Tomiichi Murayama issues a statement expressing the intention to find "an appropriate way which enables a wide participation of people" to resolve the comfort women issue.

July 1995: The private-sector Asian Women's Fund is established under the initiative of the government. The fund implements an "atonement project," including the giving of "atonement money" to former comfort women, based on donations from the Japanese people.

July 2007: The U.S. House of Representatives passes a resolution seeking an apology from Japan regarding the comfort women issue.

June 2014: The government releases results of a study into the process behind compilation of the Kono statement.