The South Korean government praised the contents of the Kono statement 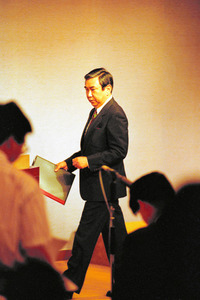 One event that triggered stronger opposition in South Korea over the comfort women issue occurred at the Upper House Budget Committee in June 1990. As greater attention was focused on the comfort women issue in South Korea due to articles that appeared in The Hankyoreh newspaper, Tsutao Shimizu, the director-general of the Employment Security Bureau of the Labor Ministry, said at the Budget Committee session about comfort women, "Although it appears there existed the situation of private-sector businesses working together with the military to move them around, we are unable to investigate what actually happened."

A major uproar arose in South Korean public opinion, and the issue began to be debated in the Diet.

In December 1991, former comfort women filed a lawsuit against the Japanese government. The Cabinet Councilors' Office on External Affairs began an investigation into documents related to comfort women.

According to the report of the government study into the compilation of the Kono statement, South Korea inquired at that time about the possibility for an apology. Although the Japanese side informally considered the possibility that "it would be appropriate to have the prime minister virtually admit to involvement by the Japanese military and express feelings of remorse and disappointment," it never did demonstrate its policy to foreign nations.

On Jan. 11, 1992, The Asahi Shimbun ran an article about a directive issued by the former Japanese military that was found at the National Institute for Defense Studies and said "the state was involved" in the comfort stations. Although the central government also confirmed the same document on Jan. 7, Chief Cabinet Secretary Koichi Kato and Deputy Chief Cabinet Secretary Nobuo Ishihara discussed the matter on Jan. 11. The scheduled visit to South Korea by Prime Minister Kiichi Miyazawa was nearing, and Ishihara proposed, "Let us make a rough apology."

When he was a youth, Kato was told directly by a former soldier about the use of comfort stations, so he agreed with Ishihara. On the evening of Jan. 11, Kato admitted for the first time involvement by the Japanese military.

In response to a question from the Asahi, he said, "We cannot deny involvement by the military of that time." At his meeting with the South Korean president on Jan. 17, Miyazawa made an official apology.

On July 6, 1992, the Japanese government announced the results of its investigation that had started in December 1991.

The South Korean government said, "We praise the efforts," but called for further investigation by saying, "It has not yet reached a point of clarifying the overall picture of the issue."

South Korea was not completely satisfied with the results of the investigation, and said: "We ask that further efforts be made to clarify the facts, including whether coercion was involved during recruitment. We are concerned about the trend in South Korean public opinion regarding the fact that the investigation results do not contain examples of clear cases of forcible taking away of women that were found in the testimony."

In mid-October, the South Korean government said, "The explanation that ‘We are unsure about the existence of coercion because no documents could be found' is viewed by the South Korean people as a sign that true efforts have not been made."

Japan was now faced with the task of how to respond to the requests made by South Korea.

In January 1993, Japan began interviewing individuals with ties to the military, the Korea Government-General and management of the comfort stations. However, those individuals denied "forcible taking away in the narrow sense of the term," such as something close to kidnapping by public authorities. Thereafter, documents related to the Korean Peninsula were never uncovered.

Around February, the Foreign Ministry compiled an internal document that said, "It cannot be denied that there were cases of being made military comfort women in a form that went against their will." In a March session of the Upper House Budget Committee, Sakutaro Tanino, who headed the Cabinet Councilors' Office on External Affairs, said, "Coercion does not only mean the use of physical means but also includes a wider range of situations that go against the free will of the individual by threatening or invoking a sense of awe."

That led to the start of consideration about incorporating a wider sense of coercion. Toward the end of the previous year, South Korea had also said, "It is important to recognize that they became comfort women against their will."

The Japanese government began work to compile a statement in the name of the chief Cabinet secretary that would express its thinking on coercion and an apology to the comfort women. The decision was also made to conduct interviews of former comfort women, as requested by South Korea, in order to "show a sincere posture and deeply understand their feelings, rather than uncover the facts."

The statement was compiled through interaction with South Korea responding to various inquiries made by Japan. For example, the original draft had "express a heartfelt apology," but South Korea expressed its thinking that the addition of a "feeling of remorse" would be better. Japan agreed to that change.

Coordination between the two sides progressed "within the limits that did not distort the facts."

However, documents from military tribunals contained examples showing that the military had used force to make Dutch women comfort women in occupied Indonesia.

Chief Cabinet Secretary Yohei Kono issued the statement on Aug. 4, shortly before the formation of the Hosokawa administration, which was established after the Liberal Democratic Party was forced into the opposition for the first time since its formation.

On the eve of the announcement, South Korea passed on to the Japanese side its view that "President Kim Young-sam praises it, and the South Korean government is satisfied."

Ishihara later reflected that "the issue has reached a certain resolution."

The statement said about comfort women "their recruitment, transfer, control, etc., were conducted generally against their will, through coaxing, coercion, etc. … (The government would like to) extend its sincere apologies and remorse."

The South Korean Foreign Ministry issued a statement that said: "It recognizes overall coercion. Along with the apology and remorse, we praise the expression of the will to use it as a lesson of history."

Letter from the prime minister to the former comfort women

On the occasion that the Asian Women's Fund, in cooperation with the Government and the people of Japan, offers atonement from the Japanese people to the former wartime comfort women, I wish to express my feelings as well.

The issue of comfort women, with an involvement of the Japanese military authorities at that time, was a grave affront to the honor and dignity of large numbers of women.

As Prime Minister of Japan, I thus extend anew my most sincere apologies and remorse to all the women who underwent immeasurable and painful experiences and suffered incurable physical and psychological wounds as comfort women.

We must not evade the weight of the past, nor should we evade our responsibilities for the future.

I believe that our country, painfully aware of its moral responsibilities, with feelings of apology and remorse, should face up squarely to its past history and accurately convey it to future generations.

Furthermore, Japan also should take an active part in dealing with violence and other forms of injustice to the honor and dignity of women.

Finally, I pray from the bottom of my heart that each of you will find peace for the rest of your lives.

(Signed by the prime minister of that time. Those who served as prime minister were Ryutaro Hashimoto, Keizo Obuchi, Yoshiro Mori and Junichiro Koizumi.)

The Government of Japan has been conducting a study on the issue of wartime "comfort women" since December 1991. I wish to announce the findings as a result of that study.

As a result of the study which indicates that comfort stations were operated in extensive areas for long periods, it is apparent that there existed a great number of comfort women. Comfort stations were operated in response to the request of the military authorities of the day. The then Japanese military was, directly or indirectly, involved in the establishment and management of the comfort stations and the transfer of comfort women. The recruitment of the comfort women was conducted mainly by private recruiters who acted in response to the request of the military. The Government study has revealed that in many cases they were recruited against their own will, through coaxing, coercion, etc., and that, at times, administrative/military personnel directly took part in the recruitments. They lived in misery at comfort stations under a coercive atmosphere.

As to the origin of those comfort women who were transferred to the war areas, excluding those from Japan, those from the Korean Peninsula accounted for a large part. The Korean Peninsula was under Japanese rule in those days, and their recruitment, transfer, control, etc., were conducted generally against their will, through coaxing, coercion, etc.

Undeniably, this was an act, with the involvement of the military authorities of the day, that severely injured the honor and dignity of many women. The Government of Japan would like to take this opportunity once again to extend its sincere apologies and remorse to all those, irrespective of place of origin, who suffered immeasurable pain and incurable physical and psychological wounds as comfort women.

It is incumbent upon us, the Government of Japan, to continue to consider seriously, while listening to the views of learned circles, how best we can express this sentiment.

We shall face squarely the historical facts as described above instead of evading them, and take them to heart as lessons of history. We hereby reiterate our firm determination never to repeat the same mistake by forever engraving such issues in our memories through the study and teaching of history.

As actions have been brought to court in Japan and interests have been shown in this issue outside Japan, the Government of Japan shall continue to pay full attention to this matter, including private researched related thereto.