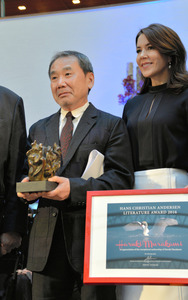 The Meaning of Shadows

It was only recently that I read Hans Christian Andersen's story “The Shadow." My Danish translator, Mette Holm, recommended it, saying she was sure I would find it interesting. Until I read it, I had no idea at all that Andersen had written stories like this.

As I read the Japanese translation of “The Shadow," I found it had an intense, frightening plot. Andersen is known to most people in Japan as a writer of fairy tales aimed at children, and I was astonished to find he'd written such a dark, hopeless fantasy. And a question naturally came to me, namely, “Why did he feel the need to write a story like that?"

The protagonist of the story is a young scholar who leaves his homeland in the north and travels to a foreign land in the south. There something unexpected happens and he loses his shadow. He is upset and confused, of course, but eventually he manages to cultivate a new shadow and return safely home. Later on, though, his lost shadow makes its way back to him. His old shadow had, in the meanwhile, gained wisdom and power and had become independent, and financially and socially was now far more prominent than its former master. The shadow and its former master had traded places, in other words. The shadow was now the master, the master a shadow. The shadow now falls in love with a beautiful princess from another land and becomes the king there. And the former master, the one who knows his past as a shadow, ends up being murdered. The shadow survives, achieving great success, while his former master, the human being, is sadly extinguished.