When harvested western horseradish was grated, the color was white and there was little stickiness.

The harvesting machine, Harvester, which makes repeated round trips of huge ridges

The harvesting machine, Harvester, which digs up western horseradish from the ground (photo above); Kosuke Suzuki, director of Kinjirushi Agri (photo below) 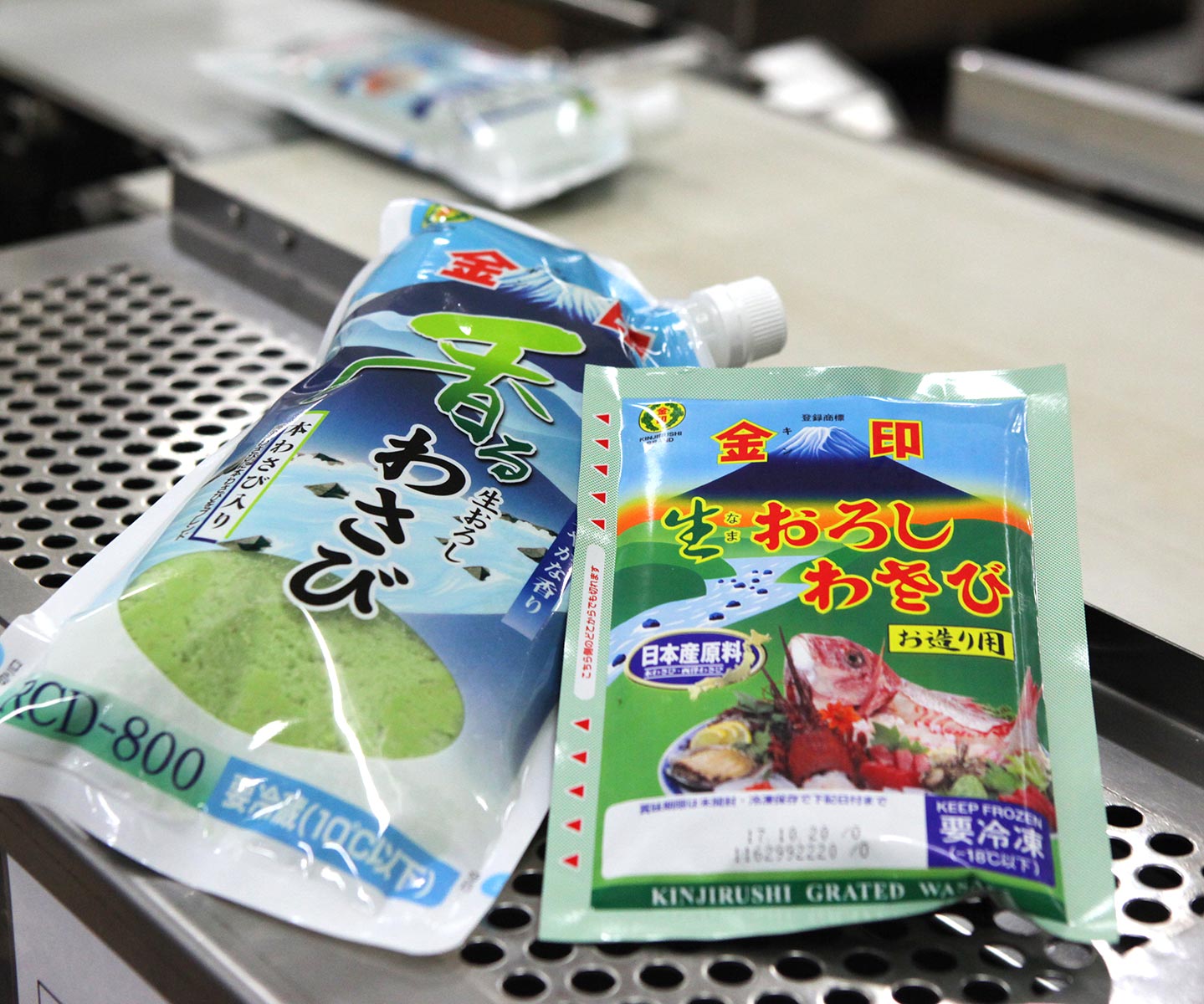 Wasabi (Japanese horseradish) is indispensable when people eat sushi or sashimi (slices of raw fish) at home. Most of that wasabi is processed in tubes or in small packets. It is always kept in refrigerators at home. Processed wasabi that made it possible to taste its Japanese pungency easily is stuffed with the wisdom of long years and various people. 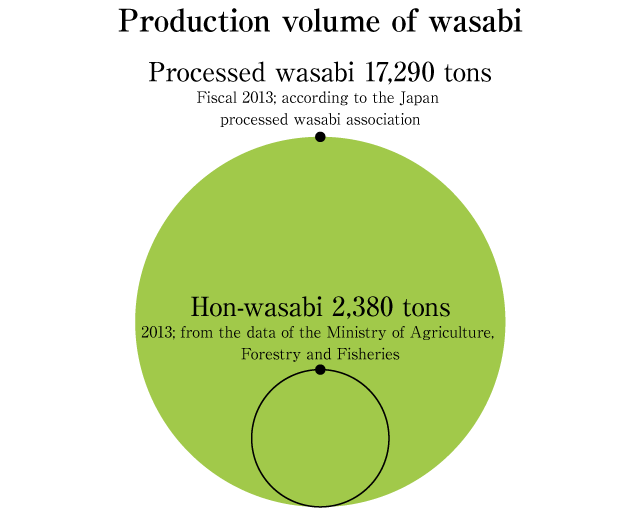 The pungency of wasabi is gradually lost after peaking several minutes after being grated. Western horseradish has 1.5 times more pungent ingredients than hon-wasabi and therefore is served as a “backseat player.” 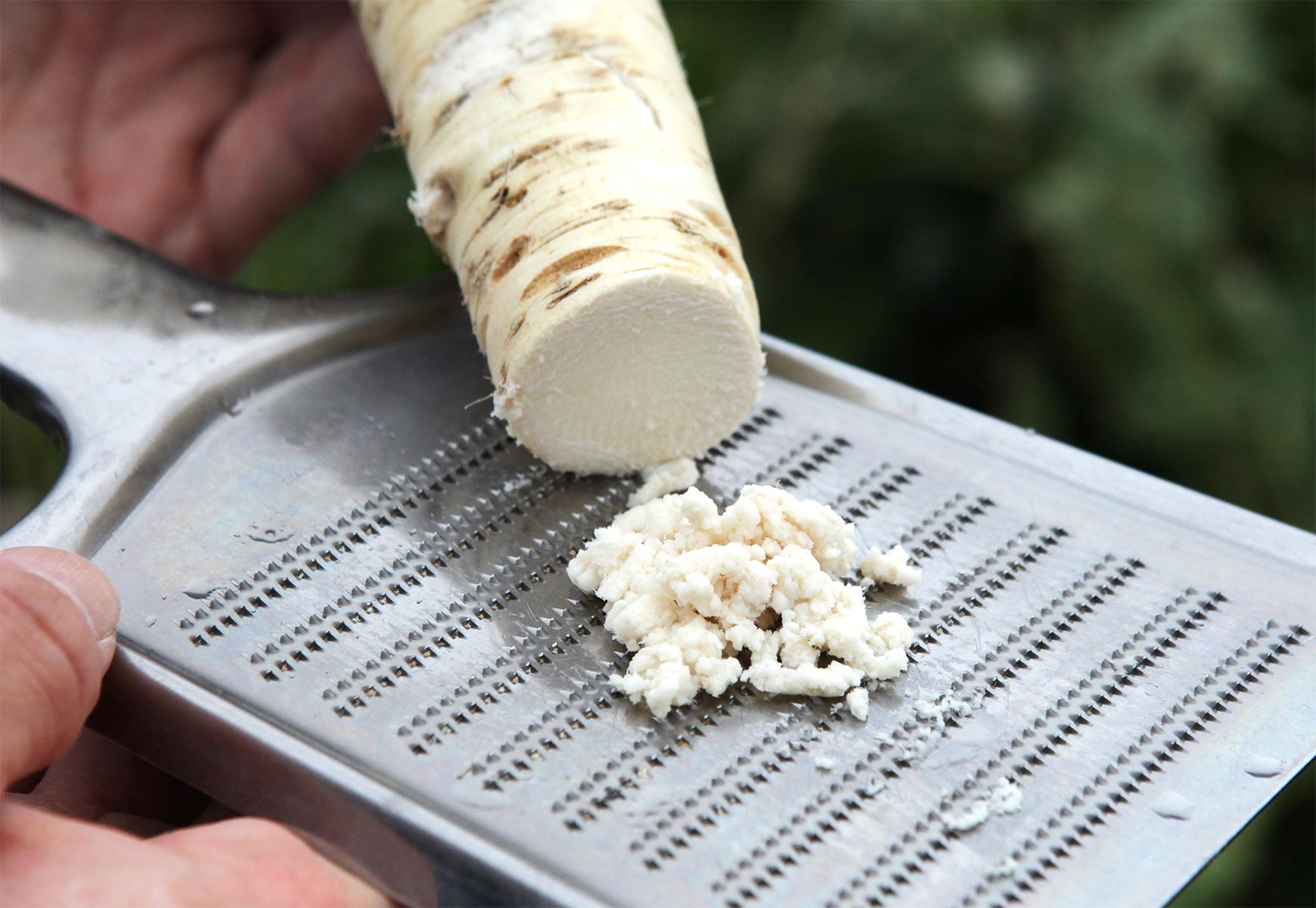 When harvested western horseradish was grated, the color was white and there was little stickiness.

Much of western horseradish is imported from overseas, but Nagoya-based Kinjirushi Co., which has the largest share of the market of processed wasabi for commercial purposes, sticks to domestically grown western horseradish. The Abashiri region of Hokkaido, whose climate is similar to the land of origin, Europe, has become a big production area. Kinjirushi is also operating a major factory in the region. 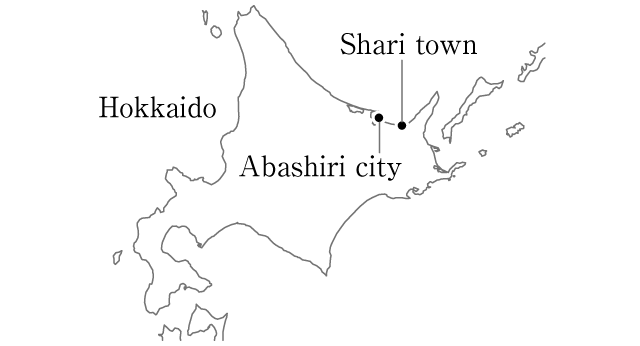 Nurturing it in a northern land

We visited Kinjirushi’s farm in late October 2016, the harvesting season of western horseradish. The farm, located in the town of Shari at the base of the Shiretoko Peninsula, is facing the Sea of Okhotsk. The farm is so huge that the ridges are as long as 400 meters. 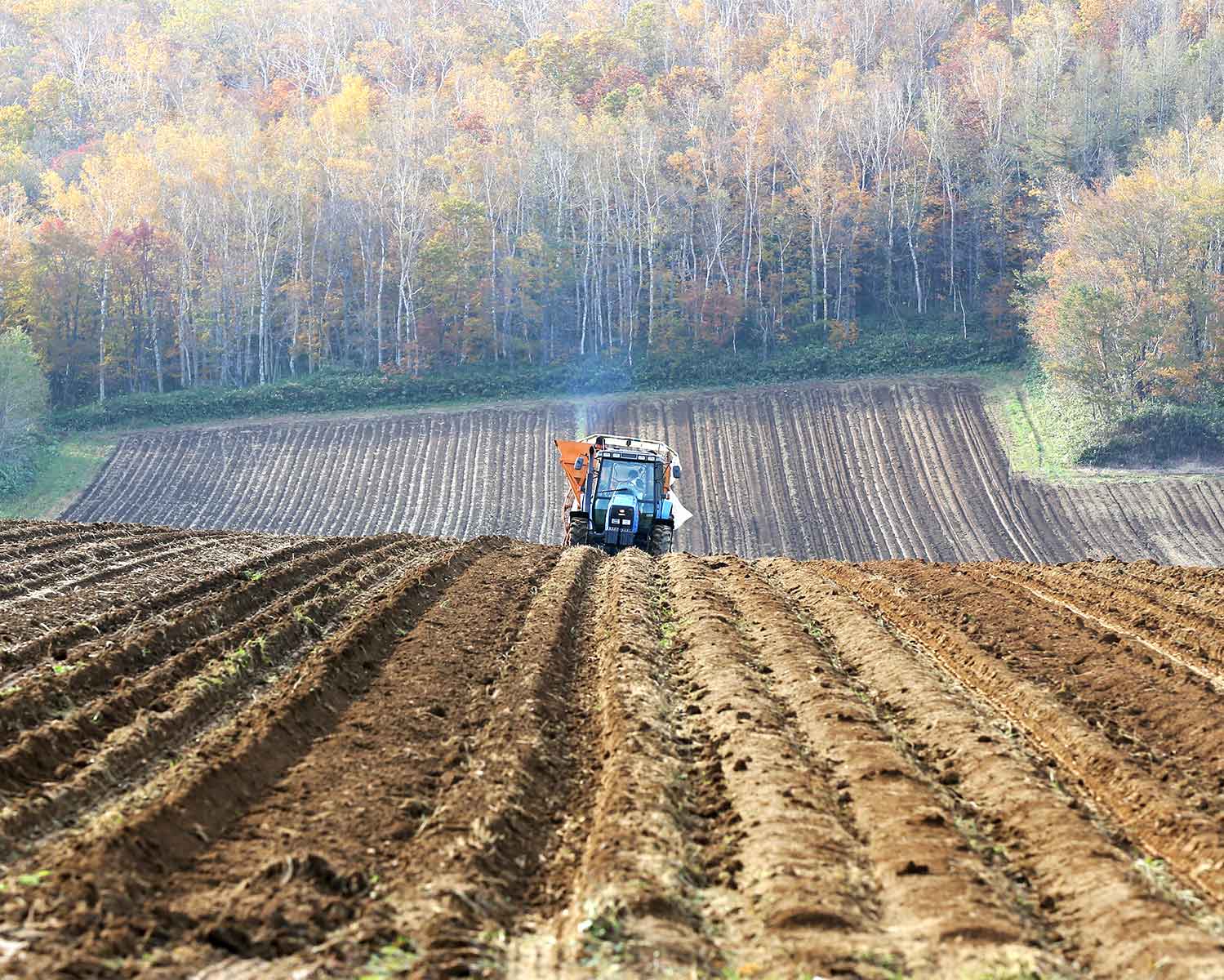 The harvesting machine, Harvester, which makes repeated round trips of huge ridges

Western horseradish, whose seedlings were planted in the spring, have become full of green leaves as they have grown, and its rhizome portions have become so large like “daikon” (Japanese radish).

“The temperature drops below zero even in April here. Because of that, seedlings sometimes become frozen. We are nurturing them while thinking about the appropriate earth conditions,” said Kosuke Suzuki, a director of Kinjirushi Agri, a western horseradish production subsidiary of Kinjirushi. 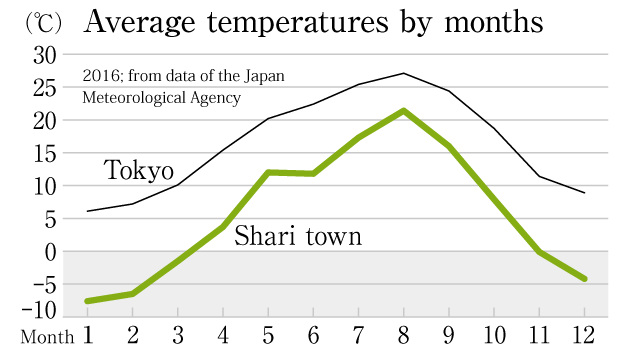 Western horseradishes are harvested with a machine designed for digging them up called “Harvester,” which was revamped by Kinjirushi on its own, and transported to its Okhotsk factory, about 60 kilometers away, by truck.

Farmer Koichi Ueki, who is entrusted with production of western horseradish, said, “The job is heavy work compared with those for potatoes or beets. But I feel pleasure when good ones are produced.” 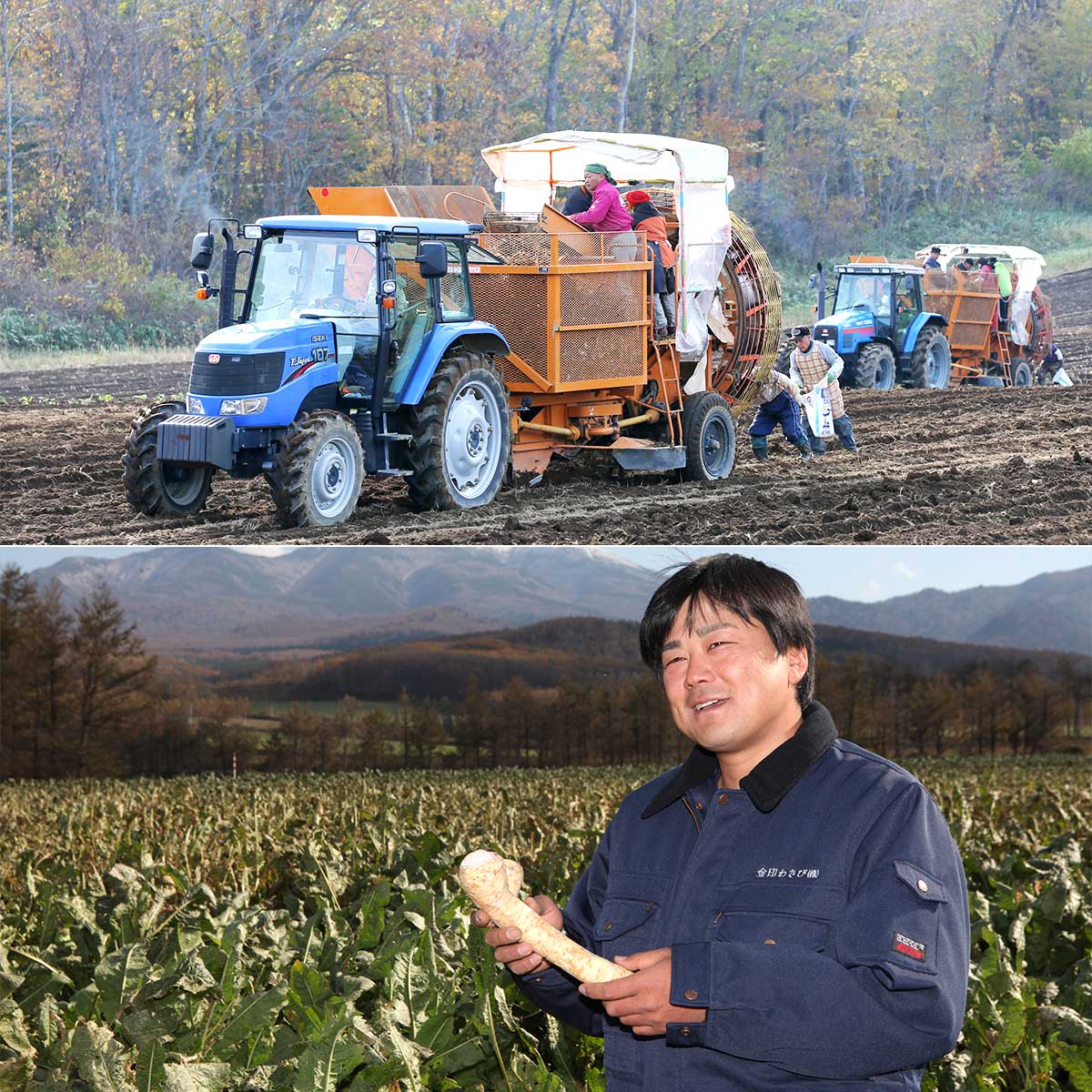 The harvesting machine, Harvester, which digs up western horseradish from the ground (photo above);
Kosuke Suzuki, director of Kinjirushi Agri (photo below)

Washed western horseradish is frozen at ultra-low temperatures of minus 196 degrees and grated into a fine powder.

Along with spread of sashimi

Powdered wasabi, the origin of processed wasabi, was devised in the early Taisho Era (1912-1926). A tea broker in Shizuoka hit upon the idea of drying raw wasabi like tea and selling it as a powder. However, there was the drawback that pungency and flavor were lost. Because of that, the powdered wasabi was sold after being mixed with western mustard to supplement the pungency.

When mass merchandise outlets such as supermarkets increased, sashimi began to line sales counters in a packed style. Then, development of “neri-wasabi” (wasabi paste), which is powdered wasabi kneaded with water in advance, progressed so that people can eat sashimi immediately.

The first company that sold wasabi paste in tubes was S&B Foods Inc. When powdered wasabi is dissolved in water, the flavor lasts for only two or three days under normal conditions. The company then developed a technology that retained the flavor for several months even in normal temperatures by adding spices secondarily. It also obtained a patent for the technology.

In 1987, S&B sold tubed wasabi that used hon-wasabi (Japanese horseradish). It made the tubed wasabi closer to real hon-wasabi and improved the color and hardness. In 2009, S&B sold “Honnama hon-wasabi,” whose raw materials were 100 percent hon-wasabi. 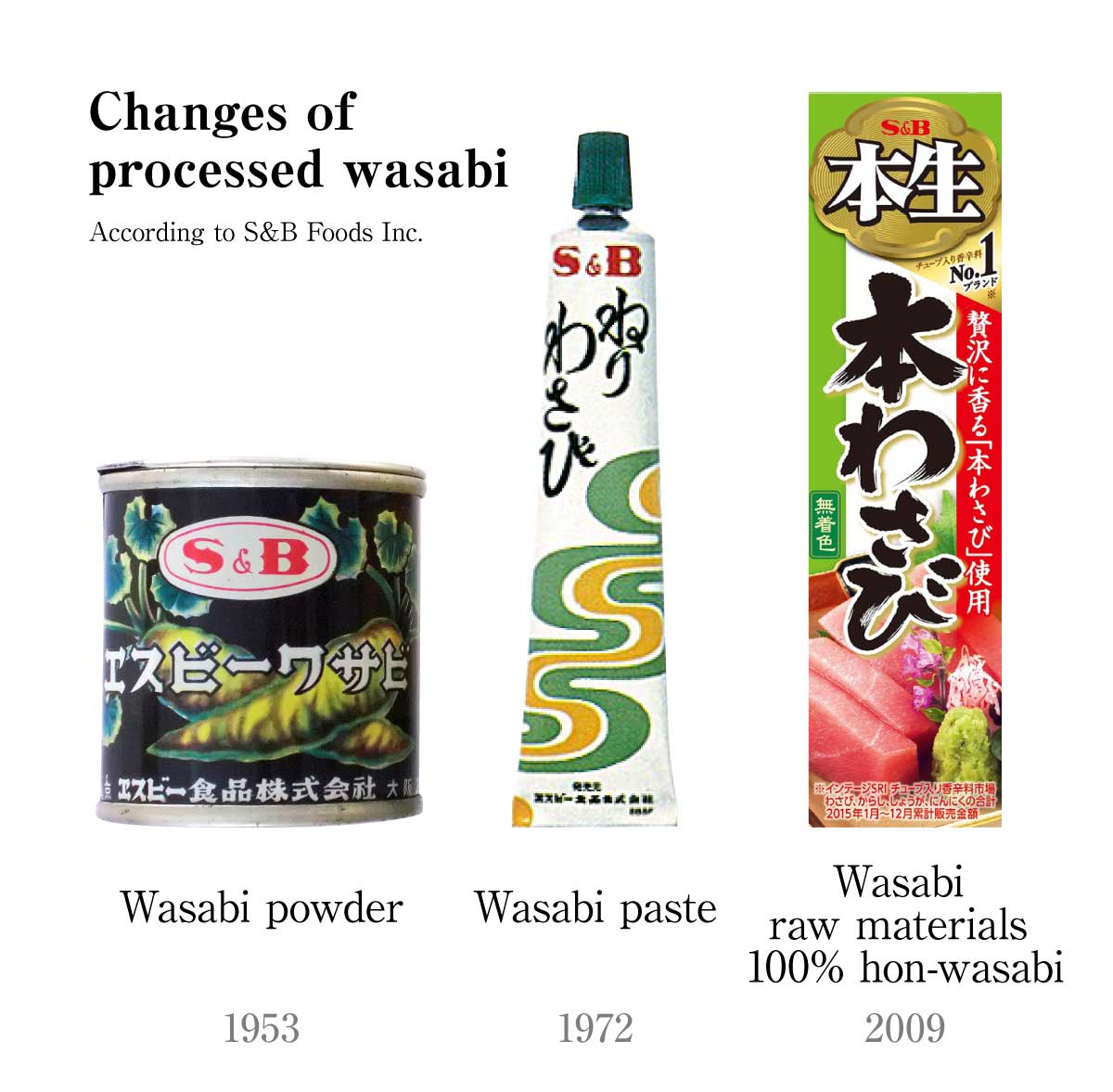 How can the pungency that easily volatilizes be retained? We visited the production sites that are conducting various trials.

“This is a container that was cooled with liquid nitrogen,” said Takahiro Okada, head of the Okhotsk factory of Kinjirushi, and pointed to a metal container with a diameter of about two meters. It was covered with a white fog from the cold air. The container is used to grate wasabi at an ultra-low temperature. The production method was developed by Kinjirushi in 1973. By grating wasabi at minus 196 degrees, the container stops enzyme reactions and preserves the flavor. 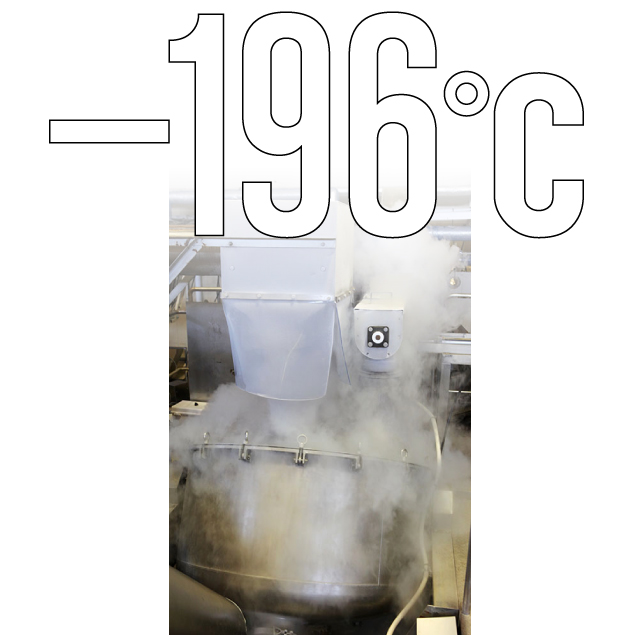 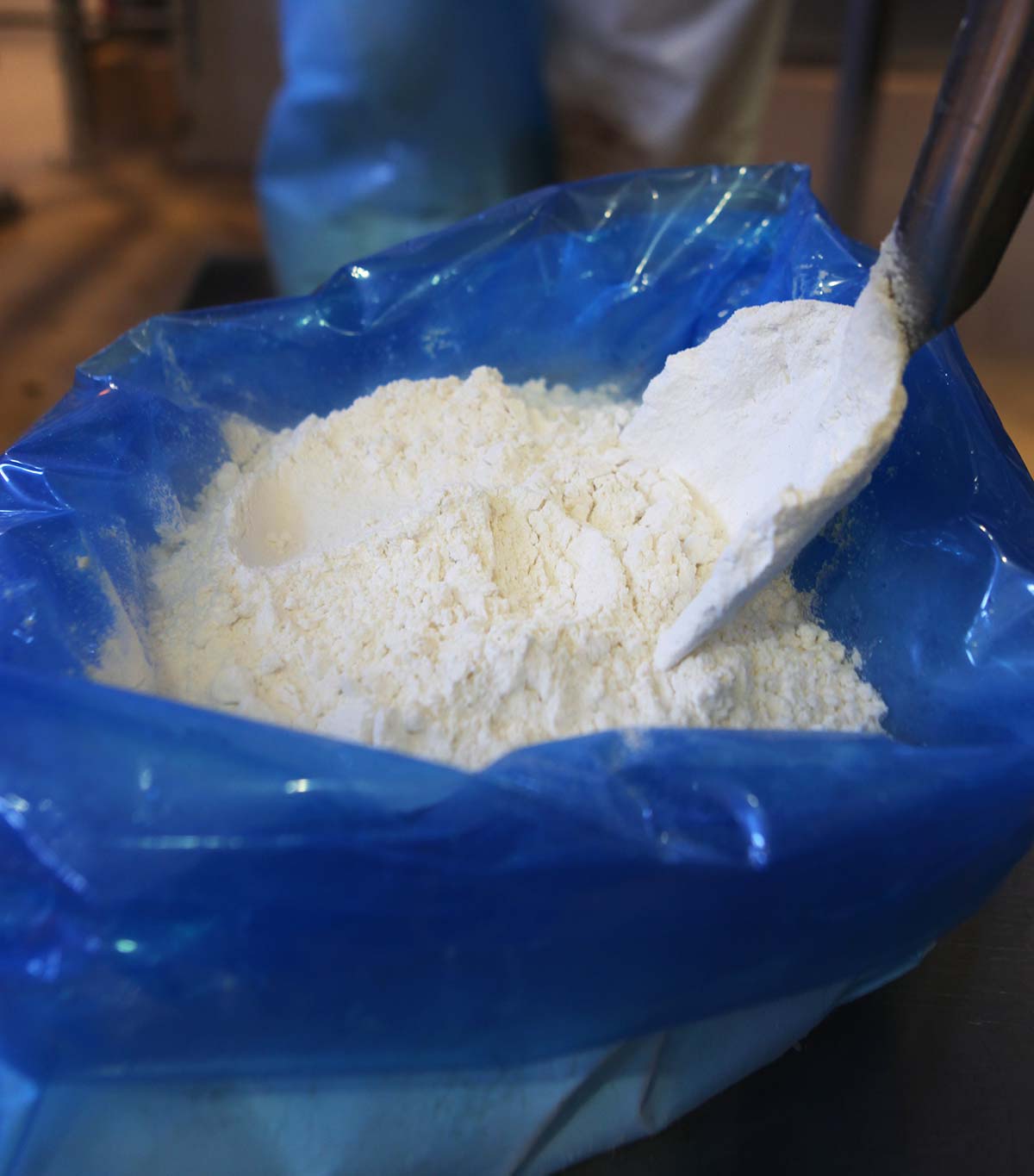 Washed western horseradish is frozen at ultra-low temperatures of minus 196 degrees and grated into a fine powder.

The raw material, western horseradish, is diced and washed. There is the know-how on how to wash it to maintain the pungency as much as possible. As for how to grate wasabi, the company also has its own methods to produce the “feel of fibers” favored by consumers.
“By utilizing good points of western horseradish, we are aiming to make products that bring out not only the pungency but also the taste, sweetness and umami (savory taste),” said Okada.

Foreign students make sushi in the Tokyo Sushi Academy in 2010.

Sushi takeout corner at a supermarket in Yangon in 2010

Wasabi spreading to the world

When the reputation of Japanese cuisine as being healthy spread in the 1980s, a sushi boom occurred in the United States, and sushi restaurants opened in rapid succession. Wasabi makers set up their sales promotion strongholds in the United States and began to sell processed wasabi. 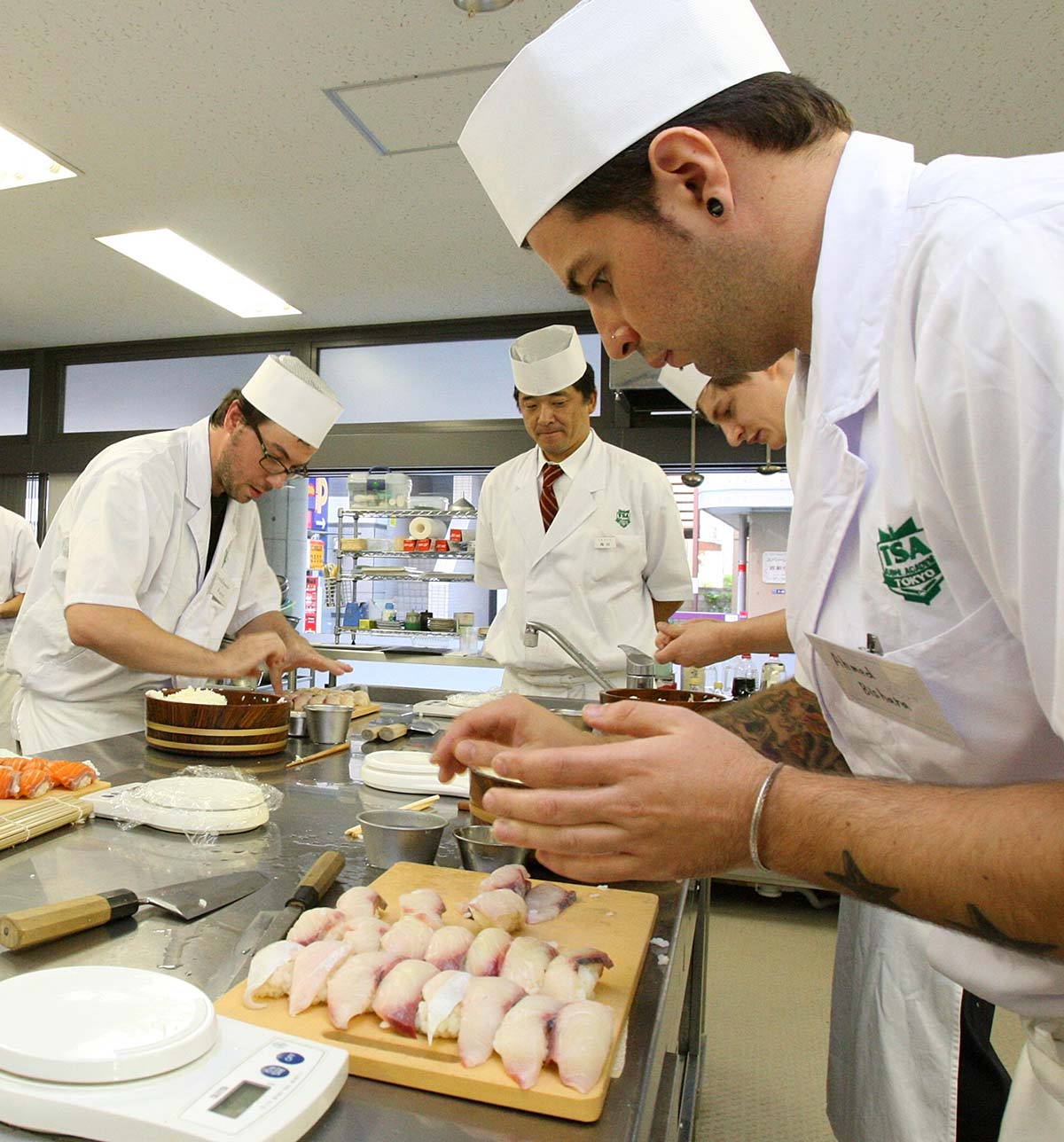 Foreign students make sushi in the Tokyo Sushi Academy in 2010.

Regarding hon-wasabi (Japanese horseradish) that originates in Japan, it is difficult to find a climate and land suitable for its overseas cultivation. Because of that, the promulgator of wasabi flavor was processed wasabi. Initially, powdered wasabi accounted for most of the processed wasabi. But neri-wasabi (wasabi paste) came to be used.

Sushi began to spread overseas from the latter half of the 1980s, and exports of wasabi grew. In the 1990s, eating sashimi of seafood, such as salmon, lobster and mirugai clams, was established as a status symbol in Asia, particularly in China, despite the fact that there had been no custom of eating raw fish until then. As a result, considerable demand was produced for tubed wasabi. 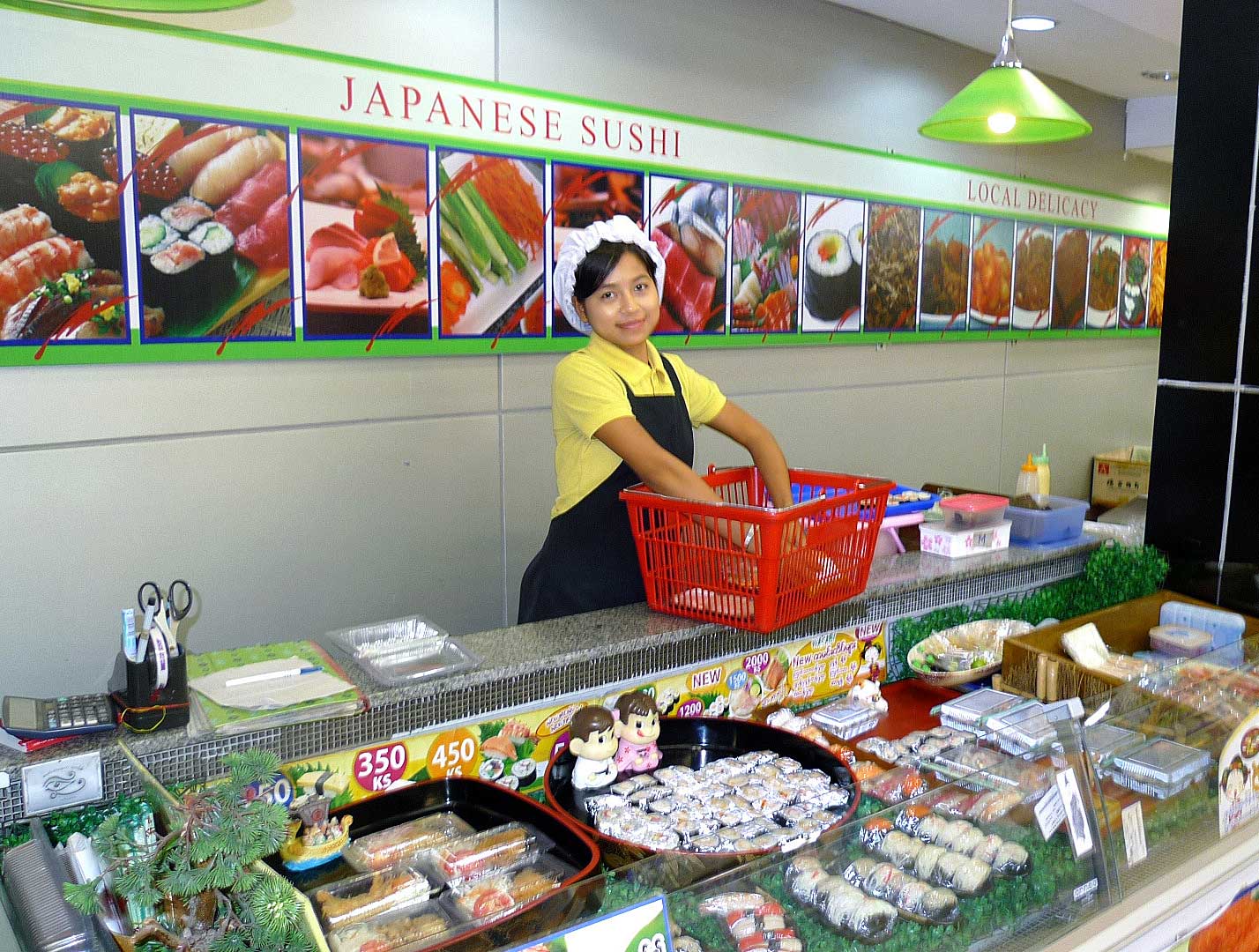 Sushi takeout corner at a supermarket in Yangon in 2010

In the United States, the word, “wasabi,” took root along with the sushi boom. It is now widely used not only for sushi and sashimi but also for dressings and barbecue sauces as a hidden flavor.

Wasabi in tubes containing 43 grams is commonly sold overseas as well as in Japan. However, tubes containing 310 grams, which are common in Japan for commercial use, are sold to retailers in the United States. 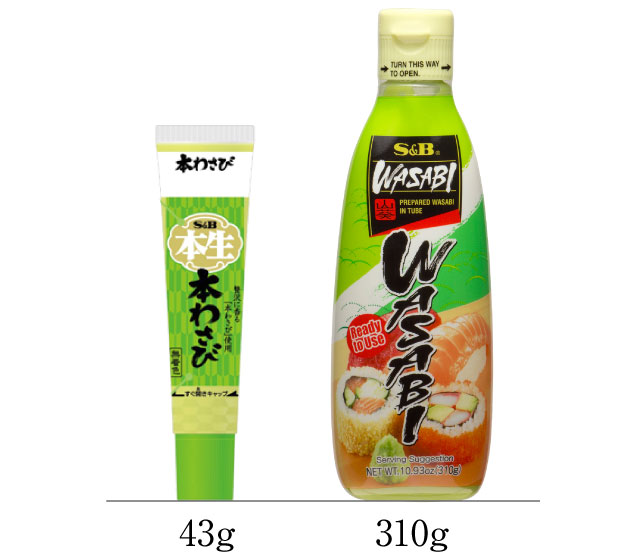 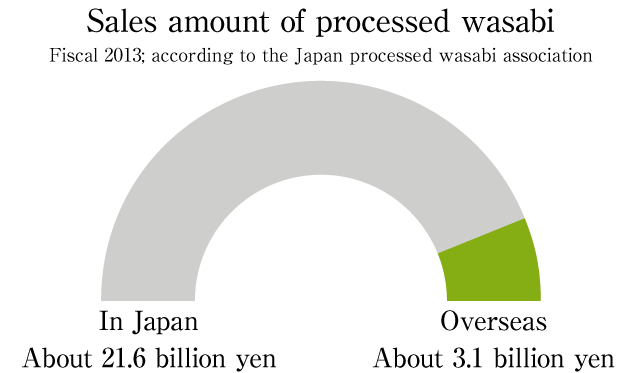