Zelenskyy calls for peace during online session with college kids 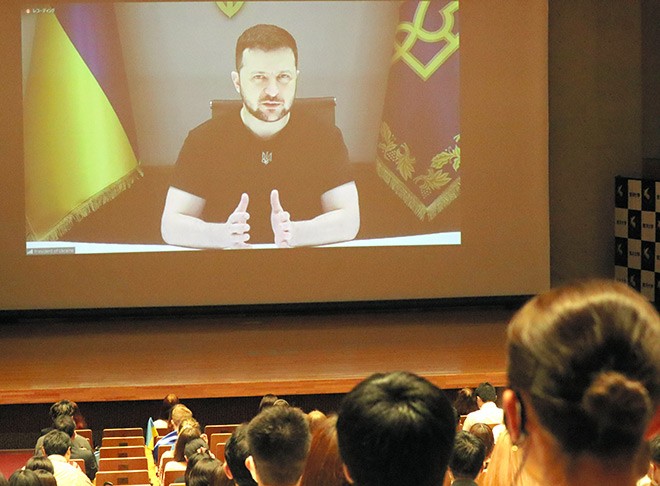 Ukrainian President Volodymyr Zelenskyy delivered a message of peace in an online lecture to students at a university in Tokyo on July 4, saying how the future of the world, including Japan, "depends on us."

“Today I want to talk to you. ... exactly about peace, not about war,” Zelenskyy said to about 350 people--including university students who left Ukraine after Russia’s invasion and are studying in Japan--at Toyo University in Tokyo’s Bunkyo Ward.

His lecture was simultaneously broadcast to 14 other universities across Japan.

“Ukraine is defending its own land, its sovereignty, its territory. Ukraine is fighting for peace,” Zelenskyy said.

He said, “Peace. What was the norm has become a memory” thanks to Russia’s aggression.

He ended his six-minute speech by saying, “There is only one time when we can all serve peace in the whole world. And this time is now.”

The audience burst into applause.

A Japanese student asked Zelenskyy during the question-and-answer session where his strength comes from as he has been delivering messages almost every day since the Russian invasion began in February.

"My dream is that there will be no war in Ukraine," he said. "I can work as hard as it takes to bring the territory and people back to Ukraine."

The president also replied to a Ukrainian student who said, “I am wondering every day how I can save my home country.”

He said students who fled the war and are studying in Japan are defending the education of Ukraine.

“I want you to participate in the reconstruction of our country with the knowledge you have gained,” Zelenskyy said.

Toyo University signed academic contracts with three public universities in Ukraine to support students there who lost the opportunity to study following Russia’s invasion. It has accepted 12 students from Ukraine since May.

The last time Zelenskyy spoke online to an audience in Japan was on March 23, when he addressed Japanese lawmakers online.