Experts now have a better picture of ancient Nara burial 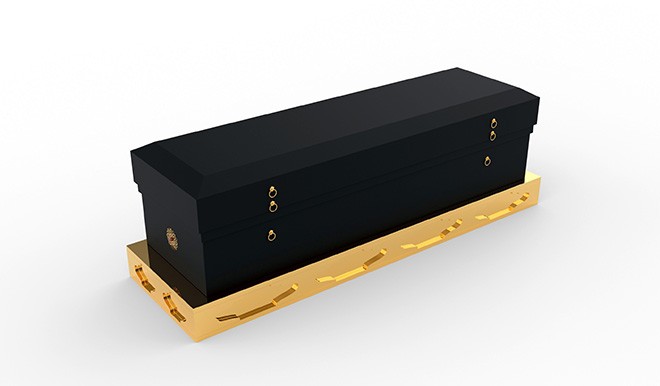 An image reproduced with computer graphics of how the coffin in the ancient tomb in Asuka, Nara Prefecture, probably looked like (Provided by the Archaeological Institute of Kashihara)

KASHIHARA, Nara Prefecture--Whoever was laid to rest in an ancient burial mound that is renowned for its “Asuka beauties” murals was placed in an elegant cedar coffin coated in black lacquer with gold-copper alloy and copper fittings.

Researchers used computer graphics to create a reproduction of the coffin based on fragments found at the site.

The Takamatsuzuka burial mound in Asuka in the prefecture is believed to have been built between the late seventh century and early eighth century. The murals are designated as a national treasure.

A team from the Archaeological Institute of Kashihara here and the Nara National Research Institute for Cultural Properties in Nara estimated the coffin measured 199.5 centimeters by 58 cm and was placed at the center of the mound’s stone chamber.

Past research established that the coffin was coated on the outside with black lacquer and its inside was painted with red pigment with traces of mercury.

It remains unknown for whom the tomb was built, but clearly it was someone of very high rank.

Murals depicting the beauties, as well as noblemen and animals, were discovered in 1972, along with fragments of the coffin and 15 decorative fittings made of gold-copper alloy and copper.

The two institutes studied how the fittings came together for their latest research.

The image of the coffin was jointly produced by Tama Art University in Tokyo and the Archaeological Institute of Kashihara.

It will be go on public display at a special show commemorating the 50th anniversary of the discovery of the wall paintings starting Feb. 5 at the institute’s museum in Kashihara.