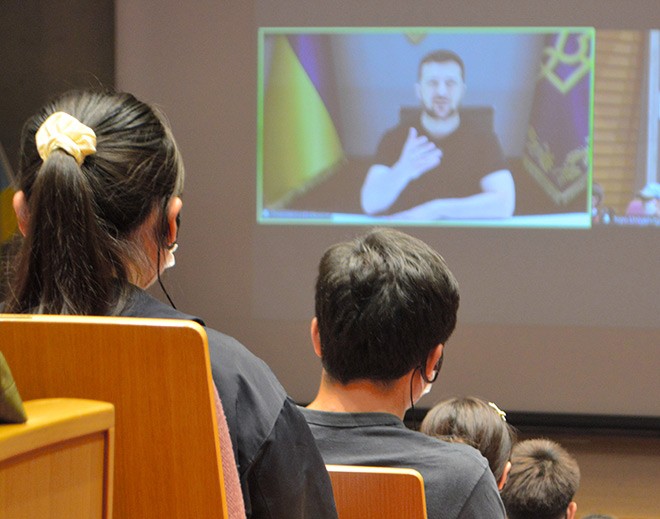 Students at Toyo University in Tokyo listen to an online address given by Ukrainian President Volodymyr Zelenskyy on July 4. (Kazuyuki Ito)

Like many Japanese, a student at Tokyo’s Toyo University has felt concerns about his own country’s defense capabilities as he followed the daily coverage of Russia's war against Ukraine.

The 21-year-old now supports an increase in Japan’s defense spending. He felt inspired after listening to Ukrainian President Volodymyr Zelenskyy’s online address earlier this month to his university.

“Japan should spend more on defense, even if it is only a small increase,” the student said.

Whether Japan should expand its defense budget is emerging as a key issue in the July 10 Upper House election following Russia’s invasion of Ukraine.

Prime Minister Fumio Kishida’s ruling Liberal Democratic Party is advocating a steep increase in defense expenditures in its campaign platform. The LDP wants to expand such spending to exceed 2 percent of Japan’s gross domestic product from the current 1 percent or so.

The Toyo University student said he has been glued to online and TV coverage of Russia’s invasion of Ukraine and the subsequent fighting since it began Feb. 24.

“I saw war in real time for the first time in my life,” he said. “I had never imagined that war can occur in the time that I am living now.

“Seeing the footage, I now believe that we should be fully prepared to defend our country.”

The student said he was deeply moved by Zelenskyy’s determination to keep fighting to protect his country’s territory and its people.

When he asked the Ukrainian president where he derives his strength from during his online address to about 350 students at his university on July 4, Zelenskyy replied, “I can work as hard as it takes to bring the territory and people back to Ukraine.”

It was the president’s second online address delivered to an audience in Japan, following his widely covered one to the Diet in March.

Russia’s aggression heightened anxieties about possible war against Japan among the Japanese public, according to an opinion poll taken between March and April by The Asahi Shimbun.

When asked if they were more anxious than before about a possible war between Japan and a neighboring country, 80 percent of voters replied that they were.

The share of those who cited “no particular change” was 19 percent, according to the nationwide survey conducted through questionnaires.

Motohiro Ono, head of the Japan-Ukraine Cultural Exchange Association, said he will consider the defense and diplomatic policies of each party when he votes in the Upper House election.

He said his perception of Japan’s national security has changed through the association’s activities to assist Ukrainians in leaving their country amid the fighting and making a living in Japan.

“I am a pacifist and war was never an option,” said Ono, a resident of Yao, Osaka Prefecture. “But seeing Russia’s aggression, I came to believe that Japan should bolster its defense capabilities to protect the country on its own.”

He said making sufficient preparations for a worst-case scenario will be necessary since having a dialogue with some countries in the region surrounding Japan is impossible.

Yumiko Yoshida, 81, a resident of Kashima, Ibaraki Prefecture, who experienced the Pacific War when she was young, said she is alarmed by the government’s attempt to steeply increase defense expenditures while citing the war in Ukraine.

Yoshida lost her parents and 3-month-old sister during the Great Tokyo Air Raid in March 1945, becoming a war orphan.

She was too young to remember her parents whose remains have never been found.

After the war ended, she was passed around among relatives. And some relatives treated her harshly, forcing her to stand outdoors in the snow as part of being disciplined.

Yoshida said she was pained and reminded of her own ordeal as a young child when she saw TV footage showing Ukrainian children fleeing to the border to escape the shelling.

“Our country should exhaust all diplomatic channels possible to avert war, instead of trying to expand defense outlays by taking advantage of the crisis in Ukraine,” she said.

A 38-year-old company employee in Tokyo’s Ota Ward said the war in Ukraine has changed the way she views the world.

“I had never felt war as something so real” until the conflict, she said.

She noted that learning about what has been taking place in the conflict in addition to the fighting, such as looting, rapes and the plight of Ukrainian women evacuating with children after being separated from their husbands, has been emotionally traumatizing.

She said she will cast her ballot after comparing each party’s defense policy, her first time to consider security issues in an election.

Japan’s defense outlays have increased for 10 years in a row, hitting a record 5.4 trillion yen ($39 billion) in the initial budget for fiscal 2022.

Kishida pledged to substantially raise his nation’s defense expenditures at a summit with U.S. President Joe Biden in May.

(This article was written by Kazuyuki Ito, Hajimu Takeda and Yosuke Watanabe.)